Benvenuto Cellini in Gotham City at the 2007 Salzburg Festival 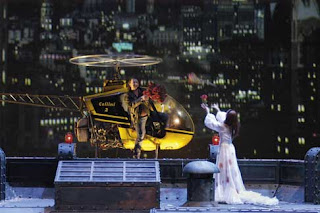 Berlioz´ rarely performed opera Benvenuto Cellini opened at this years Salzburg Festival in a staging by German director Philipp Stölzl, who has build a career directing music videos and commercials for clients such as Faith No More, Madonna, Sony and BMW. Asked about his thoughts on Benvenuto Cellini, Stölzl admitted to not really having attempted an analysis of the opera, but aimed primarily to entertain the audience in a sort of three-hour-music-video way. Which is exactly what he did.

The setting is futuristic and visually arresting with a rooftop view over a Gotham City clone complete with robots and flying cars. Apparently Stölzl and his team spent an entire week within the Salzburg Festival Hall earlier this year working with the lighting technology, which indeed is marvellously displayed here. A production almost tailor-made for the DVD release now scheduled for Autumn 2008.
The story of how Benvenuto Cellini managed to create a statue of the Pope and at the same time marry his beloved Maria was told relatively straight forward, despite Cellini flying around in his helicopter accompanied by his assistant Ascanio, here a robot.

Criticized by the press of being too superficial (I suppose you would have to agree – even the director himself agrees), it was nevertheless very entertaining and the audience clearly loved it.

Musically, the performance was top-class with Valery Gergiev conducting the Vienna Philharmonics. However, I am uncertain about the qualities of the score itself – is this really a neglected masterpiece? The orchestration did seem rather square at times and the melodic inspiration not always levelling with Berlioz´ best works. Or perhaps Gergiev did have an off night after all (to be fair: I don´t think so)...

Cancellations by Neil Schicoff (caused by the stressful situation surrounding him not being appointed Intendant of the Vienna State Opera after Holender retires in 2010) and Vesselina Kasarova (ankle injury during the Munich Alcina run), led to the engagements of a quite ordinary Burkhard Fritz in the title role as well as the outstanding Kate Aldrich as Ascanio.
Upcoming 27-year old Russian soprano Maija Kovalevska as Maria has a slim and clear but ultimately anonymous voice, and came across as rather cold on stage, perhaps intentionally. Mikhail Petrenko as Pope Clemens, here a wasted rock-star surrounded by bodyguards, has a rather fine voice, but seemed dramatically quite tame, hopefully intentional considering his upcoming engagement as Hunding at the Metropolitan Opera later this season.

The street in front of the Salzburg Festival Hall is closed for the duration of performances, making it the place to sip drinks and see (and being seen by, most importantly) others during intermissions. Excellent views of the mountain and castle make the whole operatic experience here very exclusive, helped by the 360+ Euros charged for prime seats obviously..
Posted by mostly opera... at 15:14