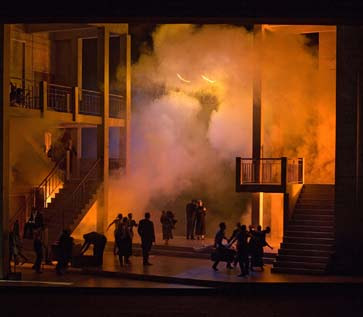 We have now reached the end and may conclude: Tankred Dorst does not present any other ideas in this 2007 Nibelungen Ring Cycle at the Bayreuth Festival than the co-existence of humans and mythological figures in parallel worlds. Neither does he believe in detailed stage direction. Or special effects (apart from stage smoke):

We are at a temple close to the Rhine. Pictures of the Valhalla Gods are hanging high above and the people are divided between ordinary men and women (who sacrifice male-sized golden sapphires) headed by Gunther and Gutrune in black-and-white evening dress, and Hagen´s green-clad men. Siegfried arrives complete with bare-chested suit from the wilderness and is predictably tricked by a relatively anonymous Hagen. The Rhinemaidens emerge in the desolate concrete graffiti wasteland known from Rheingold, now with a modern-day couple resting on a bench above them seemingly oblivious to their existence and Siegfried is killed after a modern-day boy has drawn the outline of a dead body with chalk on the floor.

The staging exhibits a curious lack of theatrical effects. There is no dragon, though there is fluffy smoke. There are no giants, just ordinary-sized men with the obligatory Star Trek costumes). Alberich doesn´t transform in Rheingold, instead we see more smoke. And the Immolation Scene is reduced to the burning for four pictures of gods, though with plenty of smoke..In the final scene we see a modern-day couple taking a stroll with a bicycle. The point: I am not sure. There doesn’t really seem to be one. Other than the co-existence of humans an mythological figures in the world. But to what purpose? With what intentions?

And on a related note: Why do you have to kill each other with a sword in a manner where it is quite obvious that the sword runs parallel to the body? The same goes for a spear? Can this not be done more convincingly in 2007?

Linda Watson was vastly better than in Siegfried, reaching the rather passable in the Immolation Scene. Though, clearly she is past her prime. Stephen Gould still hit almost all the notes, with considerable strain though, but had to yell a couple of times and was quite visibly tired towards the end. Hans-Peter König sings Hagens notes, though is completely without menace. Again Mihoko Fujimura proves why she, despite a beautiful timbre, essentially is miscast in the dramatic Wagnerian repertoire. Edith Haller´s fresh and clear soprano was the undisputed highlight of the evening, indeed one of the highlights of the entire Ring.

And again. I can say nothing on Thielemann´s conducting, that I have not already said – his reading of the score combined with the unique acoustics of the Festspielhaus makes this one of the most memorable orchestral performances I have ever witnessed. In an entirely other league than the singers.

As I’ve noticed particularly here in Bayreuth, the applause is very differentiated. Standing ovations to Christian Thielemann. And quite a lot applause in general as people were applauding and tramping their feet for 25 minutes. If this is for Thielemann, it´s well deserved – otherwise I was a bit curious to witness such a long applause for this, otherwise not exceptional Ring.
Apparently this Ring was booed in the first re-run this year, but no boos were heard today.
I mistakenly thought that the entire orchestra was to appear on the stage after the completed cycle, but apparently this is a Bayreuth tradition unfortunately only reserved for premieres.

This Nibelungen Ring opened in 2006 to largely negative reviews from both German and International press (Thielemann apart), with which I largely agree. The main idea that the world of the Gods and myths exist parallel to, and unseen by the modern day world seems promising, but Tankred Dorst does not develop it further. Combined with the lack of direction and simple drama this is a quite uninspiring staging of the Nibelungen Ring. Dorst has said that he deliberately chose to keep politics and power out of the staging, which is fine. He just didn´t seem to replace it by anything else.

In short: This is Christian Thielemann´s Ring.

See also: Rheingold, Walküre and Siegfried reviews from the same cycle
Posted by mostly opera... at 21:13