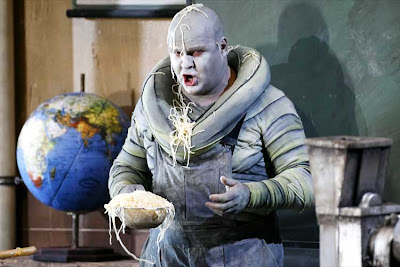 Tankred Dorst has taken us to school in this third installment of his 2007 Bayreuth Nibelungen Ring:

Mime lives in a deserted biology classroom, trying to mix potions while scribbling illegible signs on the blackboard. Siegfried is the ever-hopeless student, who simply forges the Nothung by waving his hand. Curiously dressed, by the way, with a costume depicting a bare hairy chest.

Located deep under a highway in the middle of a forest, with modern-day construction workers camped in a tent, is Fafner´s lair.
In the only exception to the lack of interaction between the human and mythological world, a teenage boy is lurking around Fafner´s nest, looking curiously into the cave. Hagen, perhaps? Eventually Fafner appears from beneath through heaps of smoke and after his death, a wood-bird tour guide with an arrow points Siegfried along the highway to Brünnhilde´s Rock, or rather: Brünnhilde´s cave.

The following confrontation between Wotan and Erda, which takes place on an otherwise empty stage flooded by a clear blue light is stunning and the most beautiful image of the entire cycle. We then descend to Brünnhildes subterranean cave, where Siegfried wakes Brünnhilde, who in return succeeded in ruining the entire scene:

Linda Watson´s Brünnhilde was, to be polite, less than mediocre. Shrill, off-pitch and wobbly. While admittedly a difficult part to cast, it simply must be possible to do better than this. The final scene was simply nightmarish. Not to speak of the lack of chemistry with Stephen Goulds not overly impressive Siegfried: Stiff acting, flat singing and clearly at the ends of his reserves.

Of the remaining, Albert Döhmens Wanderer is not bad at all, though neither is it particularly interesting. Andrew Shore relied too heavily on sprechgesang for my tastes, while Gerhard Siegel as Mime was the most convincing character on stage.
Mihoko Fujimuras Erda remains beautifully sung, though entirely undramatic in both presence and singing.

In stark contrast to this largely mediocre singing was Christian Thielemann’s conducting, of which I am running out of praise. Amazingly beautiful. On levels with the greatest on record as well.


See also: Rheingold, Walküre and Götterdämmerung reviews from the same cycle.
Posted by mostly opera... at 22:00