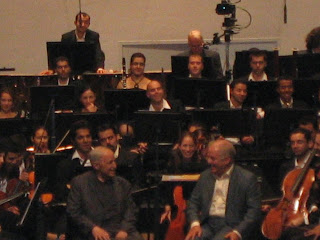 Founded in 1999 by Daniel Barenboim (Argentinian-Israeli I believe) and the late Palestinian intellectual Edward Said, the West-Eastern Divan Orchestra consists of young musicians (under 25) from Israel, Palestine, Lebanon, Syria, Jordan and Egypt and is “an orchestra agains ignorance” according to Barenboim.

This year, the West-Eastern Divan Orchestra has been invited by the Salzburg Festival as Orchestra in residence – and scheduled for concerts in the Salzburg Festival Hall as well as afternoon sessions in the newly renovated university aula just opposite the Festival Hall. I attended two excellent afternoon sessions lasting roughly from 3 to 6 pm for the bargain price of 10 Euros.
The sessions were designed to discuss several aspects of the music, with demonstrations by the orchestra and questions from both audience and orchestra members (luckily for me, in English). 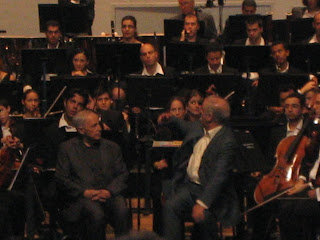 I believe, the theme of the first afternoon (with Barenboim) was “sound and silence” and that of the second afternoon “structure” (with Pierre Boulez).
The first afternoon started with the orchestra played excerpts from Schönberg`s Variationen für Orchester op. 31 and the Tristan chord and the rest of the afternoon was a sort of master class with Daniel Barenboim and the young British conductor Robin Ticciati, who conducted the Leonore Overture (no. 3). The dialogue between the two conductors was excellent, Barenboim came across as very open-minded, and kept telling Ticciati he was conducting the overture with excessive dynamics in the strings (funnily the very same thing Barenboim himself is often criticized of doing - not by me however). Orchestra members had suggestions as well and the whole thing was very entertaining.

The second afternoon “structure” was with Pierre Boulez (one of my favourite conductors) and gave great insight into his way of working with an orchestra. It was also the first time another than Barenboim conducted the orchestra. Boulez conducted Bartok´s Four Orchestra Pieces – first excerpts from each of piece demonstrating how to structure the music and then the four pieces uninterrupted. And it was clearly demonstrated, that although this orchestras claim to fame is the mixed middle-eastern background, it is an astonishingly good orchestra! The way they played those Bartok pieces was just excellent – and this is not easy music to communicate. Audience members trying to show off their knowledge of modern music, certain performances etc. rather than curiosity regarding the questions they were asking unfortunately dominated the questions session. Not too surprisingly, Pierre Boulez at one point stated, that he preferred an acid response to no response at all (when asked about audience reactions to modern music). And that a high quality performance is tremendously important in atonal music, where the communication of structure is mandatory for understanding the pieces. And that performances in the 1940´s and 1050´s of Bartok frequently were awful, because neither conductor nor orchestra got the notes right, not to talk about the structure in the music.
In short, two excellent afternoons with an excellent orchestra. I don´t think the members are professional musicians (yet), but they played like they were. Indeed, a very good initiative.
Posted by mostly opera... at 15:10