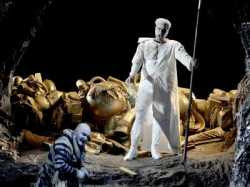 Tankred Dorst, 81, is everything, except an opera director: Reknowned in Germany as both poet, playwright and filmmaker, he stepped in at short notice to direct this Nibelungen Ring, which opened at the Bayreuth Festival 2006, after the cancellation of Lars von Trier. "My advantage is that I don't have to continue a career as an opera director", as Dorst pointed out.

Indeed, or rather unfortunately, his lack of experience with the operatic medium, as this was in fact the first oper he staged, proved a major liability in the entire cycle.

The binding idea seems valid enough on paper: The world of the Gods exists parallel to, and unseen by, the modern-day world. However, Tankred Dorst entirely failed to bring this concept alive: There was no hint at individual characterizations or dramatic interaction between any of the characters. We were presented with stand-up-and-deliver acting reminiscent of the 1960´s, without conveying the essential inner drama of the work.

Initially, the pink Rhinemaidens appear between giant blue boulders imitating the bottom of the Rhine with the Rhinegold glittering behind them. The Gods live in a concrete wasteland with graffiti-splashed bare grey walls. From there we descend into a power plant where Alberich rules. In many scenes modern-day people are seen in everyday activities oblivious to the presence of Gods and Giants, such as the power plant worker checking a gauge during Wotan and Alberich´s confrontation in Nibelheim. Furthermore, all mythological figures are curiously dressed in clothes looking like a mixture between Star Trek and japanese couture.

Albert Döhmen´s Wotan was slightly under-characterized, but his voice seems adequate for the part, without being exceptional. Michelle Breedt disappointed as a shrill-sounding Fricka. So did Andrew Shore as Alberich. Gerhard Siegel´s Mime was both well characterized and acted, and also Edith Haller stood out as Freia with a clear soprano and convincing acting. Mihoko Fujimura´s Erda has a very beautiful timbre, though entirely devoid of the primeval drama essential to Erda.

The real star of the evening, however, was Christian Thielemann, deservedly greeted with standing ovations. Starting out courageously slow, the music spread out like a fan, grandiose, with myriads of details such as the violins were imitating the waves of the Rhine, just like small bubbles. Thielemann is dramatic without being shallow. Emotional without being melodramatic. Obviously with the magnificent acoustics on his side, making the orchestral sound slide up underneath the singers and spread out into the audience. This is one of the major Wagnerian conductors of the Century.

I was told that uncommon for Bayreuth, no changes had been made by Tankred Dorst to this years production compared to the opening in 2006. Dorst himself simply says he told the singers to "fill their characters with something of themselves" – maybe a slightly more detailed stage direction would have been helpful.

Further reviews from the Cycle: Walküre, Siegfried and Götterdämmerung
Posted by mostly opera... at 21:50