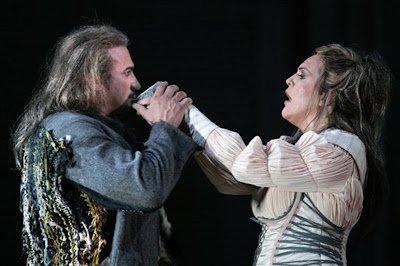 Tankred Dorsts "the Gods live in a parallel, invisible world"-Nibelungen Ring theme has now reached the second evening with Walküre at the 2007 Bayreuth Festival.

We are now in a formerly grand estate. A street pole smashed through the wall. Nothung, needless to say is stuck inside. Following the triangular drama of Star Trek look-a-likes Hunding, Siegmund and Sieglinde, Wotan is confronted by Fricka in front of a line of old dusty statues. Oblivious to these happenings, modern-day workers go about with their work. We then descend into the Walküre Rock, here a Cave lined by uneven rocks, with an open entrance at the back during which the various characters appear.

It did not seem like Tankred Dorst brought any other ideas than the parallel mythological/modern-day world into play. And the complete absence of interpersonal drama, which make up a large part of the opera was notable and vastly responsible for this rather inadequate Walküre-staging.

One singer truly stood out: Adrianne Pieczonka as Sieglinde. A beautifullyl warm and dusky tone combined with fine acting as well. As Siegmund, Endrik Wottrich disappointed, seemingly lacking warmth in both voice and acting. Kwangchoul Youn sings Hunding´s notes, but conveys none of the menacing aspects of the character.

Albert Döhmens voice is still in place as Wotan, though his characterization is rather monodimensial. The complete lackof chemistry with Linda Watsons equally monodimensial Brünnhilde is, unsurprisingly, not helpful. Especially when she is short on the charisma account as well, though she does hit the notes, but with an offensive vibrato. Michelle Breedts Fricka is as shrill here as in Rheingold. On a positive note, the collective team of Valkyries were excellent with some very fine voices among them.

Again Christian Thielemann and the Bayreuth Festival Orchestra were the heroes of the evening. Grandiose. Insightful. Beautiful. And contrary to the cast: Not heard better anywhere else.

See also: Rheingold, Siegfried and Götterdämmerung reviews from the same cycle.
Posted by mostly opera... at 20:29

I listened to Parsifal over Internet radio this summer and agree with your comments about Thielemann. I know the first Kna Parsifal recording well and Thielemann's interpretation had a similar, remarkable luminous quality although I did not think the tempi were the same at all.

Thanks for these posts about your Bayreuth experience. I am now thinking it may be possible for me to see a performance there now that it seems more feasible to obtain tickets...