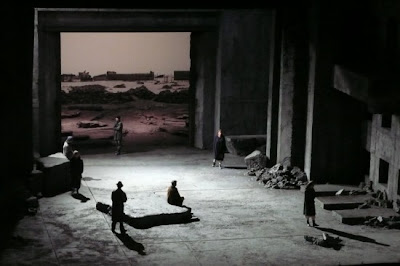 Robert Carsen´s mid-90´s Lohengrin production for the Bastille Opera takes place in an unspecific war/post-war setting. Everything about this staging speaks war and desolation. Ít is dark and grey, entirely without warmth or comfort. The people of Brabant appear in ragged clothes. The King wears the uniform of a General.

To this land of war without hope, Lohengrin suddenly arrives - on a swan. He clearly comes directly from Paradise as illustrated by the lush green background scenery from where he appears - and ultimately disappears. Upon his departure, he brings back a leaf from one of these paradisic trees and plants among these warriors as a sign of hope - evil is conquered at last.

The center of the action was Waltraud Meier´s mesmerizing Ortrud. Her radiance is magnetic and even though she doesn´t even sing a note in act 1, she still manages to be the center of attention. Her razor-sharp voice effortlessly filled the auditorium (on pitch as well) in a shattering portrayal of Ortrud, which I do not expect to be surpassed in my life-time.

Compared to this almost unnatural tour de force Mireille Delunsch actually was a rather fine Elsa. She has a very floating and expressive way of singing, which suited Elsa well.

Ben Heppner was Lohengrin, and though he may have a beautiful voice, he is distinctively unexpressive. On top of this one may add his mediocre dramatical skills - basically he seems to have 2-3 facial expressions, to be used at random.

Jean-Philippe Lafont was a rather weak Telramund and also Jan-Hendrik Rootering seems to have his future behind him. Evgeni Nikitin as the Heerrufer, on the other hand, was excellent. As was the orchestra, conducted by Michael Güttler in his only performance of the otherwise Valery Gergiev-conducted run.

The evening, however, belonged to Waltraud Meier. 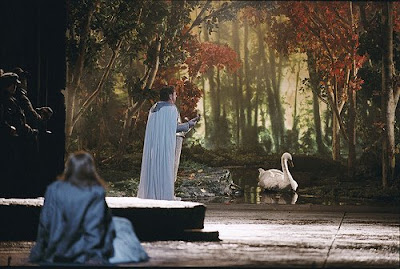