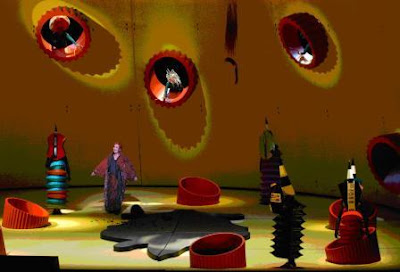 In many ways, the Dresden Semperoper is Richard Strauss´ own theater, the place of the world premiere of works such as Salome, Elektra and Rosenkavalier. The Zwinger Gallery is next door, the river just outside and the views of the old city of Dresden are magnificent.

Die Frau Ohne Schatten, Richard Strauss answer to the Magic Flute is a fascinating work, his most interesting post-Elektra opera, in my opinion.

Director Hans Holmann (also responsible for the Zurich Parsifal) sees Die Frau Ohne Schatten as a childrens fairy-tale, told by The Nurse. The sets are simple and black with superimposed grotesque geometric elements in bright colors, through which the various characters enter and exit. I would have imagined the parallel worlds inherent in the plot (Emperor vs. Dyer) would inspire more daring interpretations, but this did not seem to be case here...

Vocally, the evening was largely disappointing: Luana DeVol is definitely past her prime, with a shrill voice and excessive vibrato as Barak´s Wife matched by Alan Titus as her weak and dry husband. Both Jon Ketilsson and Susan Anthony as the Emperial couple were rather anonymous, both vocally and dramatically. The name of The Nurse is better forgotten (I actually have forgotten it..).

Marc Albrecht created just the right balance between attention to detail and grasp of the overall structure of the work. No surprise, that the Staatskapelle Dresden is a first-rate Richard Strauss-orchestra – this season all of Richard Strauss´ operas are on the schedule.. 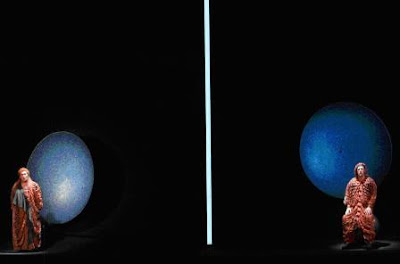