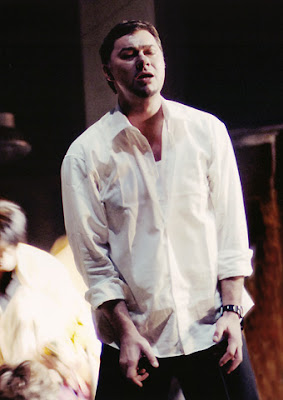 Young Russian director Dmitri Tcherniakov´s 2005 staging of Boris Godunov (1869 original version without intermission) at the Berlin State Opera has been controversial from the start (read: this is not a traditional staging). I am firmly rooted in the bravo camp and in short, I find Tcherniakov´s concept quite brilliant:

This Boris Godunov takes place in 2010 Russia. Boris , The President is haunted by his conscience with recurring nightmares of the false Dmitri, while Shuisky, the great manipulator pulls the strings, and controls Boris by constantly scheming and conspiring behind his back. The focus on internal power struggles is rather clear. Here, one feels sorry for Boris.

First of all René Pape is a magnificent Boris. On his own terms, however. First of all he actually sings all the notes, almost in bel canto style with the usual unstrained top notes.
Not that you need to actually sing all the notes, in order to be a great Boris, as many of the greats of the past in this traditional profudo role (such as Martti Talvela, Aage Haugland just to mention a few) have clearly demonstrated. But the part does benefit from it. Furthermore, I do not see any compelling reason why Boris Godonov needs to be performed by a singer in the last stages of his career.

The most revealing aspect of René Pape´s performance, however, was his appearance on stage. His very human Boris breaks down completely on stage in a way I honestly did not think him capable of dramatically. There is nothing left of his normally somewhat cool and lofty manners.

Furthermore, Russian speaking friends claim his Russian to be excellent, undoubtedly an added benefit of growing up behind the Iron Curtain (he is from Dresden). By a large margin the most convincing Boris on stage today. To be repeated in Peter Stein´s new production at the MET in 2010, as well as in Dresden in the 2008-9 season.

Daniel Barenboim´s reading is both dense, structured and committed. I am still not entirely at home with Mussorgsky´s original orchestration, something entirely different from Rimsky-Korsakoffs glittering brilliance, but with the added benefits of a very rugged authenticity.

Of the others, Burkhard Fritz was excellent as the false Dmitri demonstration a considerable talent for comedy as well as being in fine voice.

René Pape with Boris´monologue ("I have attained power") from this production: