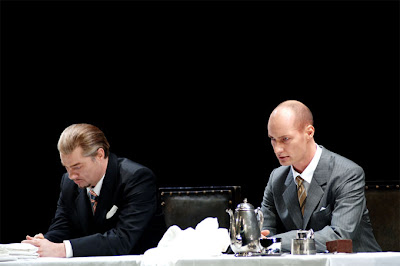 In Philipp Himmelmann´s Don Carlo, the central character is Filippo as the entire concept evolving around Filippo´s dysfunctional modern royal family: Carlo, the foolish teenager; Eboli, a sort of security agent; Elisabetta, a confused wife; and Filippo, trying to keep up both outer and inner appearances. One of the major strengths of this production is the visualization of the division between the private and public lives of this modern royal family, as we observe them in both private (mainly during meals) and public functions.

The love story between Carlo an Elisabetta is clearly secondary to the relationship between Filippo and Elisabetta, which again is secondary to Filippo´s inner struggles. Carlo is handed over to the police/inquisition at the end, restoring “business as usual” as the Inquisitor takes the now empty seat at the dinner table.
In summary, I thought this production rather brilliant as opposed to Himmelmann´s previous Macbeth in Dresden, which somehow missed the boat. Clearly Himmelmann´s Don Carlo was based on a very thorough study of the text and the insights he provides are not negligeable.

Obviously, quite a few people disagreed with me as I counted at least 8 people leaving their front-row seats in the middle of the second act as well as quite a few, which didn´t return after the intermission.
Now, why anyone would want to leave Don Carlo before Ella giammai m´amo, especially with the current cast is completely beyond me, no matter how many naked bodies are put on fire during the auto-da-fe (quite a few in this production, as it turned out).
That René Pape was a magnificent Filippo was entirely expected, though he was clearly only medium-inspired. That he overpowered Kwangchoul Youn´s by all standards fine Inquisitor was equally expected. Beatrice Uria-Monzon was an effective, though vocally not pretty Eboli, while I never really took to Norma Fantini´s somewhat bleak Elisabetta. As the confused teenageboy Andrew Richards was rather convincing and Roman Trekel was in fine voice, which however has become rather dry as Posa. All accompanied by a competent
Paolo Carignani in the pit.

Interesting blog as for me. It would be great to read something more concerning that topic. Thanx for sharing this data.
Sexy Lady
Female Escorts London