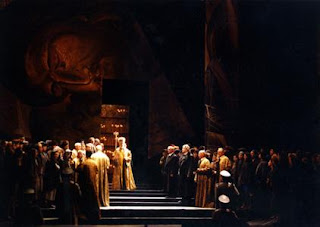 This was the second performance of the new Yannis Kokkos produced Boris Godunov (originally assigned to Willy Decker, who´d cancelled) at the Vienna State Opera.

As both the Simpleton, Church and Kromy Forest Scene + a reduced version of the Polish Scenes were played, it required some detective work (read: Look in the programme notes) to find out exactly what version was on. As it appeared, Yannis Kokkos and conductor Daniele Gatti had assembled a “new” version – a mix of the 1869 and 1972 versions including all of the above scenes with the original Mussorgsky orchestration. This decision created some confusion in the audience after Boris´ death, since most people thought the opera was over, which in fact it was not, leaving the Simpleton scene to close the show.

Yannis Kokkos is also responsible for the sets, very simple with costumes and robes of brocade for Boris and the other notables.

The star of the evening was definitely Ferruccio Furlanetto. His voice is in remarkably good shape, he has no problems with the top notes and his acting is very convincing. Robert Holl is somewhat less convincing vocally as Pimen, while Nadia Krasteeva makes a fine Marina (the originally scheduled Olga Borodina apparently was released from her contract due to "irreconcilable differences with the management" (VSO)). Marian Talaba was rather tame as Boris´alter ego - the false Dimitri.

The orchestra under Daniele Gatti played with a very raw, dramatically convincing sound, without doubt facilitated by the use of Mussorgsky´s own orchestration (as opposed to Rimsky-Korsakoff´s more glittering approach).