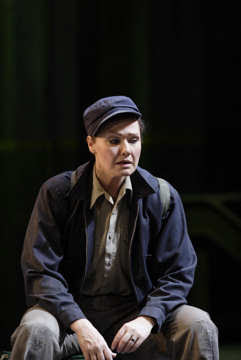 This Jürgen Flimm production of Fidelio has previously been seen at the Metropolitan Opera and was considered controversial when it opened in 2000. Why, I find it hard to see.

Jürgen Flimm´s Fidelio is text-book straight-forward, no-nonsense, following Beethoven´s "script". Yes, it does take place in an unspecified time-period, probably mid-20th century in a totalitarian state. We do see handguns, and A President as opposed to A Minister arrives towards the end. But that pretty much sums up the controversy, as I see it. Furthermore Jürgen Flimm is very detailed in his direction of the singers and there is constantly activity on stage, though not approaching my irritation threshold.

Finnish soprano Karita Mattila is a radiant Fidelio, a part optimally suited to her unique air of shyness combined with determination, her wonderful middle-register and straight-forward singing, with a minimum of portamento. The velvety beauty of her middle must be among the most beautiful things on an opera stage today. Emotionally involved as well as vocally convincing. As she appeared here, Karita Mattila seemed the ideal Fidelio.

The magnificent Norwegian bass-barytone Terje Stensvold was Pizzaro. Employed for 30 years at the Norwegian National Opera before embarking on an international career 5-6 years ago, at 60 he now seems to be everywhere, with a voice effortly filling the auditorium.
Endrik Wottrich, with the dubious pleasure of being completely overpowered by Terje Stensvold in the Stockholm Walküre, delivered his one aria (well). Eric Halfvarsson was in more steady voice than is often the case for him at this point in his careeer as Rocco.

Ticket prices at the Royal Opera are what they are, obviously. And, it may be argued, if the quality of performances are three times as high as anywhere else, they obviously would be justified..

The Metropolitan run of this Fidelio production (with Karita Mattila, Ben Heppner and René Pape) is released on DVD. 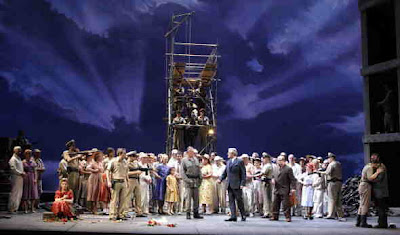