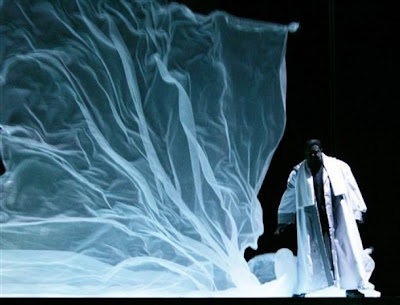 Johan Botha is Otello at the Vienna State Opera. He has the required vocal skills, fills the auditorium effortless with great top notes on pitch and a voice under excellent technical control.

What is the problem with Botha then? Quite simply, that I find him entirely uninteresting as a performer. First of all, he is simply too large to successfully impersonate any character on an opera stage. Secondly, Botha appears static and is unable to create any chemistry between him and Barbara Frittoli´s wonderful Desdemona. Or Falk Struckmann´s Iago. Johan Botha´s Otello appears naive bordering on stupid. The vocal characterization does not improve on the physical. You wouldn´t be needing much of a brain to fool this Otello..

Falk Struckmann plays Iago with wonderful consistency as he (as always) plays himself. Earlier this season is was Telramund, now it is Iago: More friendly than menacing, but nevertheless unpredictable. Vocally he was in great shape, much better heard live than on record.

Christine Mielitz´ 2006 production is very spartan and very blue. This Otello cannot adjust to a world without war, and thus kills the only person that dares contradict him.

However, Otello without an Otello is a hard-sell. Botha is no Plácido Domingo and it would be unfair to expect him fill the Otello-vacuum left by Domingo. However, what Johan Botha offers as Otello, simply is not enough to make it worthwhile. I´d rather take Domingo on DVD than Johan Botha live..
Posted by mostly opera... at 18:19