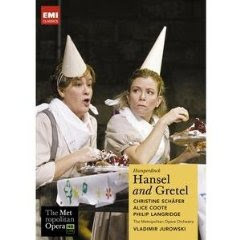 Richard Jones´ production of Hänsel and Gretel has previously been seen at the Welsh National Opera and Lyric Opera Chicago before traveling to the Metropolitan Opera, where it was filmed live in HD last Christmas and now released on DVD.

In this case, Richard Jones focus rather mono-dimensionally on hunger. In an eerie, surrealistic setting, the action transports us through three kitchens:

The danger applying such strong single-minded concept is that more often than not, the intrinsic drama of the story get lost. Luckily this is not the case here. We are still able to mentally follow the children's journey. That, children may not like it, has been an often heard criticism of this production. That depends, I suppose. I know of several children, who liked it just fine. However, there is clearly plenty for the adults here as well.

The opera was performed in David Pountney´s fine English translation, though with the level of diction of the participants, they might as well have chosen the original German version.

Petite Christine Schäfer with the almost vibrato-less voice was the ideal Grete, while Alice Coote was more standard-fare as Hänsel. Fabulously committed acting from Philip Langridge as a Witch, with the looks of a bag-lady and sweet as pie on the surface. Strong performance from both Rosalind Plowrights deranged morther and Alan Helds helden-baryton father.

Personally, I prefer the psychoanalytically Katharina Thalbach staging of Hänsel and Gretel from Dresden, but this Metropolitan Opera production is not a bad choice at all.

Hansel and Gretel in the first kitchen of their grey, desolate home: