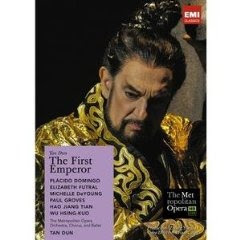 There are many fine aspects to Tan Dun´s opera The First Emperor, which received its world-premiere at the Metropolitan Opera 2006: The rhythms in the instrumental sections are incisive and oriental colorite as well as traditional Chinese instruments are well integrated into a standard Western symphonic orchestra. Furthermore, elements of Peking Opera are incorporated successfully. However, when the singers start to sing, the compository quality drops markedly. It seems Tan Dun´s composition for voice is limited to extended wailing legato lines. Which do in fact seem endless, when repeated...endlessly.

In brief, the First Emperor (Domingo) orders his General to capture the composer Jianli (Paul Groves) and make him compose an Anthem in his honour. During the capture Jianlis family is killed and his village is ruined. In return, the General is promised the Emperors daughter. However, the Emperors daughter and Jianli falls in love, though the Emperor persuades Jianli to give her up temporarily. Believing she is betrayed, the Princess commits suicide before she finds out that Jianli has poisoned the General. Mad with grief, Jianli bites his tongue off in front of the Emperor, who kills him to spare him further pain. Now the Anthem is heard: It is a slave chorus, Jianli´s revenge.

Elizabeth Futral has the exact exquisite manners of an Oriental Princess, and though she is not given much to work with vocally, she makes the most of what she has. Also Plácido Domingo seemed to struggle with this eternal wailing, but has the bearing of an Emperor. Paul Groves is the only one, who occasionally is given more than endless legato lines in the part of Jianli.

The staging is rather spectacular, incorporating several elements of Peking Opera, and all could have been rather well. Had Tan Dun´s composition only been a bit less monotonous.

Plácido Domingo from the first act: