Zurich: Tristan and Isolde with Nina Stemme and Ian Storey 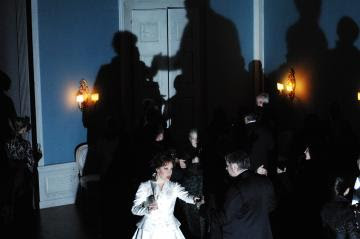 For this new Zurich Opera production of Tristan and Isolde, German director Claus Guth chose to play out the love affair (rather: The alleged love affair) between Richard Wagner and Mathilde Wesendonck in the Zurich villa of Mathilde and her husband Otto. An idea, which both geographically and historically makes sense. Otherwise, however, it doesn´t really make sense, as this is, of course not what Tristan and Isolde is about at all.

However, Claus Guth, previously known from productions such as Figaro and Don Giovanni in Salzburg, Ariadne in Zürich and Walküre in Hamburg, is a superb stage director creating convincing theatrical drama by simple, yet powerful images. A photo gallery from the production here.

This new Zurich Tristan and Isolde takes place in and around Otto and Mathilde Wesendoncks Zurich villa. Brängane is Isoldes psychological double, making Act One flicker between dream and reality, starting as Otto Wesendonck (King Marke) takes leave of his wife (Isolde) in the bedroom upon which the entire act is framed.

For the second act, the bourgeois party of the Wesendoncks, characters intermittently freezing, while Tristan and Isolde circle each other as well as King Marke within shades of blue make for compelling images. The revolving stage is spun around continuously to reveal the various rooms of the Wesendonck villa culminating with Tristan and Isolde being exposed in front of Otto and his friends in the gentlemen-only cigar room during said party. For King Marke, there may be a happy end to the story as he ultimately reaches out to Brangäne after Isolde collapses next to Tristan at the lavish dinner table, following Tristan and Kurwenals long Third Act Scene, which takes place right outside the villa.

Again, conceptionally this is hardly what Richard Wagners Tristan and Isolde is about. But it nevertheless makes for rather compelling theater.

Ian Storey´s Tristan has previously been heard at La Scala, where he made his debut in the part in 2007 (also released on DVD) and at the Berlin State Opera. As on those occasions, Ian Storey does look the part. Here in Zurich he was audibly indisposed, coughing several times during the second act duet. And as a house representative appeared in front of the curtain before the third act, stating that Storey was indisposed, but would nevertheless continue, you knew you were up for some genuine Act 3 drama: Could he make it until he died? Yes, but only just. Indisposed or not, Storey´s Tristan was much similar to the above two occasions, with a vibrato too heavy for my taste. But, as said: He does look the part, which certainly counts for something.

Nina Stemme has become a much celebrated Isolde, after making her 2003 Glyndebourne debut in the part (available on DVD). And I would say approximately 95% of a random sample of the audience though her Isolde was entirely compelling. I belong to the 5%, who have never really taken to Nina Stemme´s voice, which has become increasingly dry and with a widened vibrato over the past years. That said, she certainly can sing the part, complete with effortless high C´s, though entirely effortless it was not for her. Furthermore she is a very convincing actress, radiating considerable warmth on stage. But no doubt, she does tear on her reserves with Isolde.

Of the rest Martin Gantner made a very convincing Kurwenal, Michelle Breedt a somewhat shrill Brangäne. Alfred Muffs King Marke was rather strange, either he was sharp or flat, virtually never on pitch and with a very uneven vibrato.

Ingo Metzmacher presented a fascinating reading of the score. With clarity obviously being a major aim, he relied heavily relying on the wood-winds and provided myriads of details I cannot remember ever having noticed before. A rather brisk reading, as well. Immensely different from the approaches of the likes of Barenboim and Thielemann, but nevertheless more than valid. 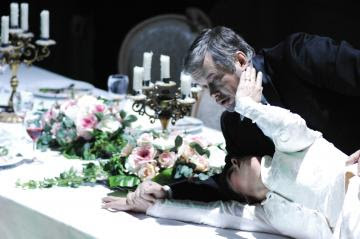 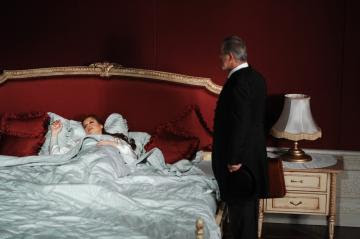 On wich date did you see it? I was there on December 18 and Storey indisposed for act 3 and I was NOT surprised!
Roger
Stockholm

I have to say Mostly that I actually disagree with you quite strongly about Stemme. Her Ariadne at the Met was nothing short of amazing. I had not been that impressed with her when I had heard her earlier in the decade, I do not own one of her DVDs or CD and while I could appreciate that she is a fine singer from the odd YouTube clip and live stream I did not really understand why she was acclaimed quite as much as she was. Last summer we though her Salome in Barecelona very impressive indeed but still somewhat short of the what the hype might have led one to expect - and really I though the production didn't do her any favors.

At the Met, however, she was extraordinary. She was very compelling dramatically but moreover her voice was, especially in the lower and middle portions, remarkably rich. There was some difficulty in the highs, to be sure, but not enough to detract from the positive impression.

It should be noted that the role of Ariadne, with the somewhat smaller orchestra, lies very comfortably for her and allows her to sing well within herself. This role, no doubt allows her to display her vocal gifts much more favorably than Isolde or Salome. Still, the voice did seem quite sufficient in size to make one believe she could indeed sing a very attractive Isolde, especially in so small a house as Zurich and, given that she has been singing Isolde for so many years, her voice seemed in remarkably good shape. Also, I think her voice suffers more than most from electronic filtering as one could really not get a good idea of its character from the broadcast last Saturday, and this explains why one really needs to hear her live if possible.

Obviously there has to be some doubt about her Brunnhilde, but that is an assumption I would very much like to hear. That is obviously not the only selling point of the La Scala Walkure and I do hope you'll find the time to make it and report.

Perhaps Ariadne is a part better suited for her after all. It is my impression she is ruining her voice with all these major Wagnerian parts, though.

As you well know, Stemme is not even close to being the sellig point for that Scala Walküre :) - but seriously the schedule for this Scala/Berlin Ring is rather confusion.
For example, the Rheingold, which opens at La Scala in May will play in Berlin in October 2010 - AT THE EXACT SAME TIME as the Boris Godunov at the Met. What that means should be quite obvious...

I went to MET on Feb. 8th to see 1/ Ariadne 2/ Stemme as Ariadne. She was absolutely fantastic, the broadcast gave an idea, but one should see her on the scene.
I admit, I did not like her as Isolde in Glyndebourne (I was afraid of her as Tristan obviously was) so I went to the MET to try again with her.
On the other hand the 2nd act is so beautiful - I mean the production ("la mise en scene").