DVD: Peter Grimes from the Met 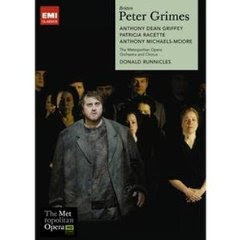 Whatever else you may think of John Doyles 2008 production of Peter Grimes for the Metropolitan Opera, shown in HD and now released on DVD, you may agree that it is dark.

Dominated by a black on black uniwall with multiple windows, from which the inhabitants of Borough peep out. The sea is far away from this Peter Grimes. The claustrophobia of Borough is tangible. As it should be, in my opinion.

Anthony Dean Griffey is a superb Peter Grimes. A relatively light tenor, providing a fascinating insights into Peter Grimes. This is not the brooding, almost menacingly haunted portrait of a Jon Vickers. Rather Griffey´s Grimes is an outsider, who only wants to belong, but doesn´t succeed. A very moving portrait.

Patricia Racette virtually shines as Ellen Orford, one of her best roles. Several of the minor parts positively lit up the stage as well, particularly Teddy Tahu Rhodes in his house debut as Ned Keene, Felicity Palmer as the pathetic Mrs Sedley and a well-sung Aunt from Jill Grove.

A major part of the success is attributable to the fine playing from the Met Orchesta in a slow, undulating reading from Donald Runnicles.

Thank you for reminding me of this. Watched it last year at the cinema and liked it a lot. Perhaps it's time for a re-watch.
/anna

Mostly, do you know the recently released BBC 1969 Peter Grimes, a live/studio performance with Peter Pears, and Britten conducting ? What do you think of it ?

I do know it. It is an excellent film. Personally, though, I do prefer a darker approach to the score than either Benjamin Britten or Peter Pears take. In Peter Pears interpretation, Peter Grimes appears an innocent poet-dreamer type unjustly ousted by society.

Britten seems to take a rather pointed approach to the score as well.

The performance is of the highest quality and Heather Harpers Ellen Orford is superb.

Absolutely Racette's best work. Haven't seen the 1969 film but based on what I've heard of her (on CD)Harper seems much overlooked.