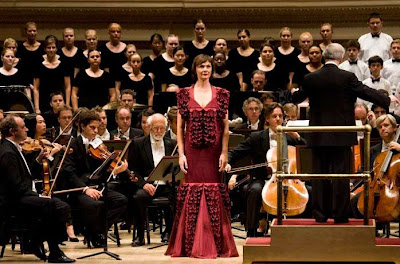 With tears streaming down her cheeks, Swedish contralto Anna Larsson proved why she probably is the finest Mahler contralto on stage today in this Copenhagen performance of Das lied von der Erde with American tenor Robert Dean Smith and Thomas Dausgaard conducting the Danis Radio SO.

Anna Larsson really sounds like a genuinely contralto and not just a deep mezzo. She has a beautiful voice, even throughout the entire register, but with a fascinating power in the lower-lying sections. Quiet and unassuming in appearance, she achieves everything with her voice in a refreshingly unsentimental interpretation, perhaps the reason why she was entirely compelling. Apart from Mahler, Anna Larsson is virtually first-choice as Erda today, with upcoming performances in both Vienna, Valencia and Aix-en-Provence.

Though the power of Anna Larsson singing left Robert Dean Smith somewhere in the middle, not many tenors may be able to match his performance today, if any at all.

The occasion was in fact a farewell concert to the Danish Radio Orchestra Hall, which moves into a new Concert Hall January 2009. Perhaps a bit too highly strung repertoire choice for that, after all, its one institution moving to another, hardly an occasion for pathos. Furthermore, the second half of the concert consisted of Haydns Farewell Symphony, a decidedly stange companion to the Mahler.

Hello! I'm running a blog with recordings of classical music broadcasts (end of plug section) and here is the link to download the concert you reviewed here (Larsson/Smith in the Mahler DLVDE with Danish forces) :
http://rapidshare.com/files/168203300/Der_Abschied.zip

The upload is courtesy kurth.johannson,

BTW my blog is http://statework.blogspot.com