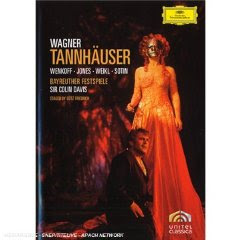 This 1972 Tannhäuser was the production initiating a new era, both in Bayreuth and elsewhere, where it was overdue finding an alternative to the New Bayreuth stagings of Wieland Wagner, which 4 years after his death now seemed to have stagnated.

When Götz Friedrichs Tannhäuser opened in 1972 it created the biggest scandal in 16 years (since Wieland Wagner dared to dispense with a naturalistic Nürnberg for this 1956 Meistersinger) at the Bayreuth Festival, including the conductor Erich Leinsdorf walking out in the middle of the run.
Why? one may ask after having seen it, as it is indeed rather tame judged by todays standards. One reason was Götz Friedrichs intensive personenregie, where characters actually roll on the floor and interact with one-another, apart from being half-naked.
However, the major controversy surrounded the on-stage appearance of the chorus in the final scene in reddish costumes, which were perceived as representing the communism of Götz Friedrichs native East Germany. In fact, this part of the staging was a last-minute alteration as Friedrich originally had planned only Wolfram and Tannhäuser to be present on the stage during the final, and was not intended to symbolize communism in any way.
Furthermore, some of the flags on display during the entrance to the Singers Hall was not un-similar to Nazi-symbols. And that, apparently was too much for Erich Leinsdorf and many critics and audiences.

However, in 1978 the production was hailed as a masterpiece and recorded as the first complete opera from the Bayreuth Festival.

Götz Friedrichs Personenregie is still alive, the sets and rest of production unfortunately have succumbed to the passing of 30 years, in contrast to the contemporary Chéreau Ring.´

Seemingly set around Wagners time, the production is minimalistic and semi-abstract.
Götz Friedrich clearly wishes to emphasize Tannhäuser's role as the artist-outsider in a militaristic and hostile society. Thus, the opera begins with him looking through the strings of his harp as were they jail bars. An he seems almost caught in an odd Web spanning the width of the otherwise naked stage in the Venusberg scene of the complete Paris version, where naked nymphs in webs dance to John Neumeiers choreography.

To say that Gwyneth Jones looks good as Venus would be an understatement in a production, which basically has her wearing an upper body fishing net. Exciting as ever on stage, and recorded before her wobble became too pronounced, she is still more of a Brünnhilde than Venus/Elisabeth. But I cannot imagine anyone else around that time, who would look equally good in that fishing net. Where she really shines is in Elisabeth's final prayer "Allmächtge Jungfrau", acted with tears rolling down her chin in a very committed and moving performance.

Spas Wenkoff is a great Tannhäuser, perhaps not an overly committed actor, however that is rather picky comment considering he immense vocal challenges of the part, which he navigates seemingly without effort. The young Hans Sotin is a noble Landgraf and Bernd Weikl is a superb Wolfram, a portrait which I cannot imagine being done better.

Accompanied by a fresh and engaged reading from Sir Colin Davis.

Curiously, much has been done to make this look like a live Bayreuth Festival performance: Applause after each act and even curtain calls. Though it is done rather amateurish with the applause not really being coordinated with the appearance of the singers.
I would categorize this sort of thing as misleading the DVD-viewing public. For recorded in the beginning of July 1978, approximately 3 weeks before the Festival opened it clearly is not an official Bayreuth performance. And I doubt, based on the appalling applause coordination, that an audience was present in the auditorium at all. A good thing they didn´t repeat this in future Bayreuth DVDs.