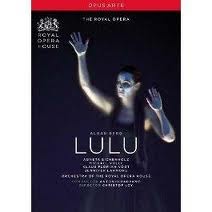 Are you familiar with Christof Loy and his work (such as Lucio Silla in Copenhagen,Theodora<"> or Die Frau Ohne Schatten"> in Salzburg) you will have an idea of what to expect from this  Royal Opera Covent Garden production of Alban Berg´s Lulu: A minimalist, black stage. Modern-dress protagonists. And what you don´t always get with Christof Loy, but have here: Exciting personenregie.
Furthermore, the minimalistic approach places huge demands on the singers, who have to be as excellent actors as singers. Which they all, somewhat unusually, are here. First and foremost Swedish soprano Agneta Eichenholz, who substituted for the originally scheduled Aleksandra Kurzak, and used a year to learn the part. She is simply outstanding. Not only does she have a beautiful, full voice and throws off the coloratura with seemingly ease. But she has this mysterious, disturbing allure that makes one understand why everything evolves around Lulu the way it does. This  Lulu is a seemingly passive creature, but with a mysterious, disturbing allure. Victim or femme fatale? None, or perhaps both. With empty gazes, there is an indifference to her characterization, which rings very true. I cannot help wondering why this woman does not have a bigger career. I don´t think there are that many, if any singers around able to deliver an equally intriguing portrait of Lulu.

And then there is Michael Volle: When was he not superb in what he did? Here as well in the combination Dr. Schön/Jack the Ripper he presents with excellent characterization and deliver. Klaus Florian Vogt, who normally has an eerie ring to his appearances utilizes this fully as Alwa. Equally superb performances from Will Hartmann (painter) and an elegant Jennifer Larmore as Geschwitz.

But ir does not stop here. What really sets this DVD apart from the rest, what makes it, in my opinion the best on the market today is Antonio Pappano. A dense, almost romantic reading of the score in the tradition of Andrew Davis makes Berg´s melodies stand out more clearly than ever before.

There are, of course, alternatives: Patricia Petibon shines in a lively 2010 production from Barcelona, the 2002 production from Zürich with Laura Aikin is also fine, but for the finest musical reading (apart from the present) you´ll have to go with Andrew Davis´ superbly conducted 1996 production from Glyndebourne with Christine Schäfer.