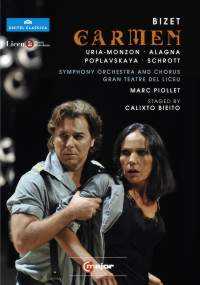 My first experience with Calixto Bieito dates approximately 10 years back in Copenhagen when he introduced 14 men squatting with their trousers down on 14 loos in the opening scene of Ballo di Maschera leaving the auditorium in a state of shock. Later Calixto Bieito has evolved into the prototype of an advanced regietheater director with highly controversial productions involving plenty of sex and nudity regardless of what work he is staging.
However, his productions in the bigger European houses (as opposed to the smaller German) seem to be somewhat less “adventurous”, such as his visually stunning Wozzeck also from Barcelona.

Equally so with this production of Carmen: Less controversial than expected but entirely compelling and probably the best Carmen available on DVD.

The stage is virtually empty, an elliptic light vaguely evokes a bull fighters arena. Set around 1980-90 in Spain, the atmosphere is compelling: It is a tough world in which the women struggle to survive. Carmen, a jaded, tough beauty leads the gang while Frasquita and Mercedes have turned to drinking and meaningless sex. The violent gang of Lilas Pastia deal in stolen electronics, and violently beats Zuniga to death while soldiers (mercenaries?) runs a coloured prisoner to his death in the opening scene. Carmen is not young anymore, neither a vulgar nor sophisticated, but a woman who she simply does what she has to do to survive. Clearly a man´s world, even the small girls learn how to dress and act sexy.

Beatrice Uria-Monzon is simply a smashing Carmen. She may not have the plush voice some of her colleagues have, but she is certainly vocally adequate and with a characterization and presence that leaves most of her colleagues behind in the dust. The details are far too many to mention but just watching her silent interaction with Frasquita and Mercedes during the Toreador song when she meets Escamillo for the first time is priceless.

Roberto Alagna gives the perhaps most convincing performance I have seen from him and he really does seem to get plenty of positive reviews at the moment. His Don José is both credibly acted (no doubt thanks to Bieito´s direction) and well sung, significantly better than his 2010 performance at the Metropolitan Opera.
Top marks to Erwin Schrott´s Escamillo, not necessarily for his occasional shaky voice, but he inhabits the stage as few as the wise guy type Escamillo, complete with a cheap suit.
Micaëla is a tough cookie as well, arriving in Andalusia in flowery garments with a camera she fights for her man, smiling haughtily at Carmen when she drags off with him (end Act 3). Also top marks to Marina Poplavskaya and for the same reasons as for Erwin Schrott: Vocally she is somewhat shaky (especially in the higher register) though I have heard her far worse. But what sets Poplavskaya apart, as always, is her complete identification with her character.
The details are plenty, the personenregie is exciting and there is not one dull moment. In this dazzling ambiance I almost forgot to mention Marc Piollet, entirely unfair, as he leads an entirely committed performance from the Liceu orchestra, especially in the beginning of the opera.

In my book, this is the best Carmen on DVD. However, there are several excellent recent DVD versions available, which may be recommended: Jonas Kaufmann and Anna CaterinaAntonacci burning up the screen at the Royal Opera in 2009, Elina Garanca andRoberto Alagna at the Met from 2010.
Of the not (yet?) commercially released versions, Daniel Barenboim has conducted two excellent ones: Marina Domashenko/Roberto Villazon in a Kusej production from Berlin 2006 and Jonas Kaufmann with Anita Rachvelischvili at La Scala in 2009.