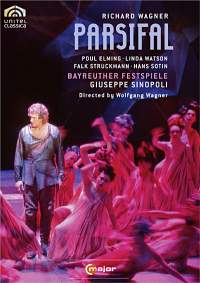 It seems that with this release the Bayreuth Festival has concluded the release on DVD of previously recorded Bayreuth Festival productions. This present Parsifal release of Wolfgang Wagner´s production was filmed in 1998. The production itself premiered in 1989 and ran from 1989-2001. The preceding centenary Parsifal production by Götz Friedrich (1982) was not filmed, however the production preceding that production (1975) was also staged by Wolfgang Wagner and released on DVD (filmed in 1981). From a purely directorial point of view, the differences between these two productions are not staggering.

Of Richard Wagner´s two grandsons, Wieland and Wolfgang, it was Wieland, who innovated post-war operatic productions with his “New Bayreuth” style of abstract, geometric stagings often involving “triangles of tension” between the characters. Wolfgang adhered more or less to the same principles, which have not been significantly renewed since Wielands death in 1966. Fully aware of his own limitations, Wolfgang however, facilitated the transformation of opera from static stagings into the present days dynamic theatre, by inviting several of his times most innovative/controversial stage directors to Bayreuth, such as Patrice Chéreau, Götz Friedrich and Harry Kupfer. One of his most controversial invitations was sent to Christof Schlingensief, who was responsible for the Parsifal production following the present one in Bayreuth 2004, which I had the luck tosee in 2007. Considering what came before, no wonder the audiences were outraged with by Schlingensief´s eclectical view of the work.

Back to the present DVD, which is a re-re-re-staging of outdated “New Bayreuth” geometry and has not aged well with time. Danish tenor Poul Elming (Parsifal) once said in an interview, that when Wolfgang Wagner directed an opera he was not at all interested in practical issues, such as how the singers should move etc., but worked at "another level altogether" and more or less expected the singers to figure these things out themselves. Needless to say, this is not a good recipe for engaging theatre.

Linda Watson´s Kundry is caught in her prime, with a beautiful middle voice and nice projection, though not a natural actress, she probably was not helped by Wolfgang Wagner´s lack of directives. Poul Elming, whose Parsifal is already available with Barenboim and who is very much a physical singer does not fully come to his right here, whereas Falk Struckmann and Ekkehard Wlaschiha both are in super shape. Hans Sotin compares well with his previous Gurnemanz, with a sonorous bass, capable of infusing life into his longue monologues, in the operas biggest part.
Best is Giuseppe Sinopoli, with a relatively straightforward, though still expansive and beautiful reading.

And trust me, as I have been there: To hear/see Parsifal in Bayreuth is an experience entirely unmatched. Written for the Bayreuth stage, the covered orchestra pit creates an entirely unique sound pattern, downplaying orchestral explosions for a more expansive crystalline sound. Hard to describe, but quite easy to identify, from DVD productions as well.

This release may primarily be of interest for those specifically interested in Bayreuth history and/or Richard Wagner´s work and/or Giuseppe Sinopoli and who plan on owning several versions of Parsifal. Barenboim´s version with HarryKupfer´s abstract sets still tops the list. For those wanting something more traditional, James Levine´s Met Opera version is not at all bad either.