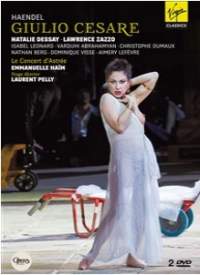 Laurent Pelly is the director of this Giulio Cesare from the Paris Opera, and from him one would expect a fast-paced staging with lots of action and entertainment. Not so difficult with Giulio Cesare you would think. Just pick any period of war, plot Cesar and the Egyptians as the adversaries, et voila!

So perhaps someone may care to explain why Laurent Pelly think it is a good idea to stage Giulio Cesare in the reserves of an Egyptian museum, where the statues gradually comes to life and museum workers enter and exit the premises all the time, pusing ancient statues around and by the end of the day (opera) leave with their girlfriends? Though, stylish, the personal relations between statues equals zero, which admittedly takes away a lot of otherwise inherent drama in what I find to be Händel´s best opera. And where is the personenregie, that Laurent Pelly is well capable of and that we have seen in several of his other productions? Additionally, for inexplicable reasons, the museum reserves fills up with renaissance paintings in Act 2 and is conversed into some sort of carpet shop for Act 3.

This was Natalie Dessay´s debut as Cleopatra. Natalie Dessay, as especially the French will know, is a very charming and honest woman, and I would love to be able to write that she triumphed as Cleopatra. I suspect much of the French audience at the Opera Garnier felt the same way.
However, you will have to be a fanatic fan and/or close friend/family member to think that she is a fine Cleopatra. Yes, she has a few beautiful notes in her middle register, but essentially it is impossible to hide that the rest of her voice is in ruins and cannot sustain even the slightest pressure. On top, her overacting seems hysterical. She is scheduled to sing this at the Metropolitan Opera in David McVicars production late this spring. To pull this off in the huge Met auditorium, she will need more than good luck. Frankly speaking, if I were Natalie Dessay I would consider pursuing the spoken theater career she has previously spoken about. Now seems to be a good time, as she is still loved by the public and she will be remembered for the wonderful voice she had 10 years ago and not for the ruin it has become.

Best of all was probably Isabel Leonard, who really has a wonderfully fluid voice, reminding me of Frederica VonStade. For some strange reason there were a lot of stage activity (workers tumbling with statues etc.) during virtually all of her arias.  Lawrence Zazzo has sung and is still singing Giulio Cesare everywhere, He clearly knows the part and acts well, but he is a small step below some of his contestants in terms of both beauty of tone and characterization, most notably Andreas Scholl and David Daniels.
Varduhi Abrahamya has a beautiful voice as Cornelia, but fails to convey the strength of character. This could well come, however, as she seems very young.


Nathan Berg, though in fine voice, scores about 1 on a sexual menace scale from 1-10.
Tolomeo must be something of a signature role Christophe Dumaux, and as on previous occasions, he sings it well, but I lack some power and strenght of characterization. Him being small, very slim man probably does not help either.

Finally, Emmanuelle Haïm is a real winner. Her style may seem a bit controversial, but it works and there is an excellent drive in her performance. Apparently she is responsible for many of the ornamentations heard, which work well as well.

Isabel Leonard is a joy. I heard her sing a superb Sesto on Friday night.

I can't imagine who is going to bother with the Met's Giulio Cesare. Dessay, sadly, is past it (and so, arguably, is Daniels) and the production is available on DVD in the wonderful Glyndebourne performance,