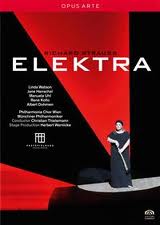 A setting seemingly fit for a Greek tragedy: The singers are under constant spotlights on an otherwise practically empty stage, continuously addressing themselves to the audience and never to each other. Stage design: Red vs. black, geometric shapes. Not at all an ineffective concept, but one that requires great stage presence of the singers to fill out these spotlights, which two (of the four protagonist) do well. Obviously, interpersonnel relations are not a focus in a production in which the singers deliver monologues to the audience. On the other hand it does render a certain perceived authenticity (fake or not) to the production.

Deceased in 2002, Herbert Wernicke obviously is not associated with revival (Bettina Göschl is) of a production originally seen at the Bavarian State Opera.

This production represented Linda Watson´s debut as Elektra as she filled in at the last minute for Katarina Dalayman (good choice Katarina, you are still in your prime and it will ruin your voice! - I know you have sung it later in Stockholm though....). Linda Watson is not bad at all as Elektra, but she suffers the same problems as most of her predecessors/contemporaries in this role: By taking it on very late in her career and well after her prime, she has difficulty meeting the vocal challenges as well as the bloom in her voice has diminished vastly. In addition she is a rather large woman and neither young nor youthful, nor gifted with a very compelling stage presence.

And the two singers who fill out  their role in the spotlights well: Manuela Uhl a touching, and radiantly looking, though vocally less radiant Chrysothemis and Jane Henschel with demonic Klytemnestra in the tradition of Astrid Varnay. Also a good performance from René Kollo in the small role of Aegisth.

ChristianThielemann is wonderfully broad and expansive with more Rosenkavalier and Frau Ohne Schatten in Elektra than I have ever heard before.

Though not a bad DVD as such, in recent years we have seen the release of several performances of Elektra superior to this one, such as from the Vienna StateOpera 1989 (Kupfer/Abbado), Zurich Opera 2006 (Kusej/Dohnanyi) and Salzburg 2010(Lehnhoff/Gatti).