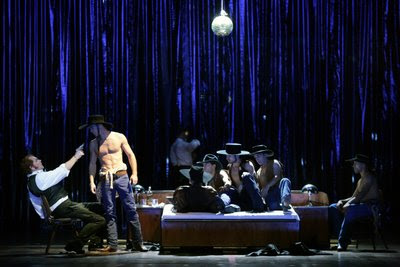 Polish director Warlikowski sees Eugene Onegin as a drama of suppressed homosexuality and a desire to break out from society, main sources (according to himself) being Tchaikovsky´s autobiography, Brokeback Mountain and Warlikowski´s own childhood in a suburban working class ghetto in Poland.

This Bavarian State Opera production was in many ways quite successful - at least with half the audience, since boos and bravos were almost equally distributed.

Set in the conformist 50-60´s, the opera starts with Tatiana´s family in front of the television watching the quintessential Communist sport: Figure skating. Onegin and Lenski come straight from Brokeback Mountain, carefully eyeing out each other and not really interested in either Tatiana or Olga. Naturally, Onegin doesn´t want Tatiana - and it seems like she is more interested in breaking out of her conformist environment than in the person Onegin as well.

The duel scene takes place in bed ("I´ve always imagined it as a bed scene", says Warlikowski), where a baffled Onegin shoots Lenski as he makes advances, while a group of cowboys watch through the windows and performing a semi-naked cowboy dance afterwards (rewarded by massive boos from the audience). The rest of the opera takes place in Onegin´s dream, the stage bathed in red light as he reaches out to Tatiana for help (Warlikowski from the programme notes: "How can he love her? He doesn´t even know her"). She seems right to refuse him, since he obviously is bad news, but not much worse than her husband, who continuously tries to stop her from chain-smoking.

This concept is helped a lot by an excellent Michael Volle, who looks like a retired rock star as Onegin (a look that also worked for his Kurwenal the following day) and he both sings and acts very well. I´ve never really taken to Olga Guryakova, whom I find rather impassive.

So was Kent Nagano in the pit, although the orchestra played well. Elena Maximova was a fine Olga. Christoph Strehl was (a rather small-voiced) Lenski, but he very believably acted out his hidden love for Onegin.

We are far from Pushkin´s drama, but as a mix of Tchaikovsky´s life-story with a touch of Onegin, much of it actually worked. Although those looking for the "real" Onegin are definitely better off obtaining a DVD copy of the MET Onegin with Dmitri Hvorstovsky/Renée Fleming or Barenboim´s Salzburg Onegin, both from last season, where you get exactly what this productions fails to deliver: Emotional drama.

Another review of this production from ionarts here.

All pictures © Wilfried Hösl, courtesy of the Bavarian State Oper
Posted by mostly opera... at 16:40

I saw Michael Volle in both Onegin and Tristan in Munich in November.

The Onegin production was an all-around disaster (although the "cowboys" were hot. Volle was a much better Kurwenal.