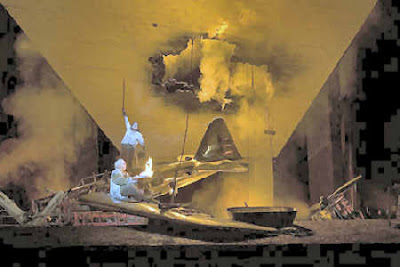 Though admittedly not earth-shakingly original, and with obvious references to both Harry Kupfer and Gotz Friedrich, there are still many fine points in Keith Warner´s Siegfried, which basically evolves around a plane crashing into the now well-known "room of Wotans mind" with the ubiquitous spiral still present.

Among the several good points were: Illustrating Siegfrieds childhood by having him played by several actors during Mime's narration; Siegfrieds descent into a dream-world for his 2nd act narration with phony stars and plastic animals, in excellent accordance with the music; the woodbird is a plastic creation controlled by the wood-bird singer as well as by Wotan (I have always thought this the most logical interpretaton); Fafner is decapitated and appeared underneath the quadrangular Tarnhelm sub-stage; the Wotan-Erda scene takes place around the spinning wall also used in Walkure act 3.

So far, the best installment of Keith Warners Ring Cycle with an appealing combination of mythology and psychoanalysis.

John Treleaven simply isn`t cut out for Siegfried, no matter how much he tries. And he clearly does try. However, neither stage appearance nor voice may carry him safe through the evening. Though admittedly, one has to cut him some slack as Siegfried is not an easy part to cast. Neither does Lisa Gasteen really bring anything to the role of Brunnhilde, an uninteresting stage appearance, shaky upper notes and a too heavy vibrato.
Sir John Tomlinson, a magnificent Wotan in his prime, really does not have the voice for the Wanderer anymore with the extended legato-lines and high tessitura exposing his exact weak points. Though for his commitment and stage command one is willing to cut him quite an amount of slack. Catherine Wyn-Rogers is no more suited suitable as Siegfried Erda than Rheingold-Erda. On the positive side Gerhard Siegel makes a fine Mime, though relying extensively on sprech-gesang.

The orchestra continued the brisk, Hollywood-style playing with Pappano, sounding fine all the way, very precisely following the singers, but with relatively few nuances.
Posted by mostly opera... at 12:53

John Treleaven is pretty much the only reason I didn't bother with this Siegfried. He irritates me beyond endurance. But then, it's not as if the ROH were faced with a vast array of world class Wagnerians to pick from. Right now, the talent just isn't there.

Principally I agree - however there are Siegfried´s out there vastly superior to Treleaven - Stig Andersen is one and also both Alfons Eberz and Christian Franz, though I´m not a particular fan of either of the last two.