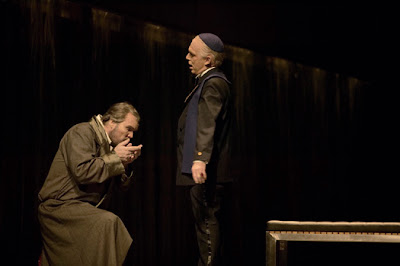 Filippo and the Inquisitor, Act 3.

We look at the near future in a totalitarian state, the main theme being the conflict between state and religion. The spotlight rightly is centered on Filippo: Inherently insecure, he pushes his son and wife away from him. Dominated by his ancestor Karl V, whose portrait appear everywhere on the sets. Receiving applause of the people in true Pol Pot fashion in the Auto-da-fé, watching bomber planes on a screen.
Don Carlo is fixed on Elisabetta, more as a protest against his father than resulting from genuine affection. Quite appropriately he is recaptured by the Inquisition taking leave of Elisabetta in a Copenhagen Airport-approximation and forced to continue to live in his fathers totalitarian regime. Posa is obviously an intellectual (he wears glasses..) who opportunistically tries his luck with both Filippo and Carlo before eventually succumbing to the Inquisition in a Guantanamo-looking courtyard. Eboli is Filippo´s Minister of Information.

Generally, Steffen Aarfing´s sets look like a mixture between military camps in Cambodia, the exerior of the Barbican Center, the Guantanamo Bay and Copenhagen Airport. Dominated by concrete moving walls and dusty colors they fit the images of a totalitarian state rather well.

Kasper Bech Holten is a very thorough stage director. Nobody just hangs around on stage and the relations between the main characters are obviously based on thorough research and work out astonishingly well. Best in the case of Filippo, less well for Eboli, whose characterization was more difficult to understand (fine performance by Randi Stene, though). As a minor irritation, Filippo (the sensitive soul..) is playing the cello playing just before "Ella giammai m´amo" .

The evening belonged to Stephen Milling. Simply one of the best Filippo´s to be heard anywhere: Rock solid, though a bit rough over the entire vocal range combined with a very convincing presence on stage. And the nothing less but brilliant decision was made to include the intensely beautiful lacrymosa duet (later to be used by Verdi in the Requiem), where Filippo and Carlo sing together lamenting the death of Posa.

Sten Byriel´s sneaky Inquisitor wisely dominates by cunning and not by in vain trying to overpower Stephen Milling. Though a bit more power and ring to the role would not have been entirely off the hook. Cleverly seen, the Inquisitor also sings the part of the Monk.

Irene Théorin was Elisabetta, and although she convinced in the last act, her voice seems to have moved towards the Brünnhilde and Isolde´s and has lost some of the lyric glow.

Nikolai Schukoff isn´t exactly a strong Don Carlo-presence and furthermore he looks like a teenager actually making Stephen Milling (about 40) look like his father.

Tommi Hakala was a rather fine Posa. Hardly his fault, that Verdi decided to shoot him five minutes (and one aria) before he actually dies, during which time he was hanging around Carlo´neck looking quite stupid.

Led by conductor Michael Schönwandt, the orchestra simply played brilliant throughout, with subtle shifts in dynamics, brilliant balancing between woodwinds and brass and with almost perfect precision. I have rarely heard better orchestral playing at this house.

A major achievement for the company and a pleasure to watch a production with such a detailed analysis of the main characters motivations. The days where the Royal Danish Opera was a provincial second-rate company are clearly over. The London Royal Opera in will be hard pressed to match this production in terms of sheer musical quality, when their new Don Carlo opens later this season... 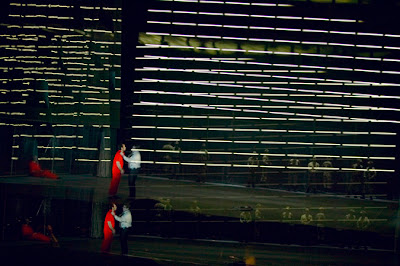 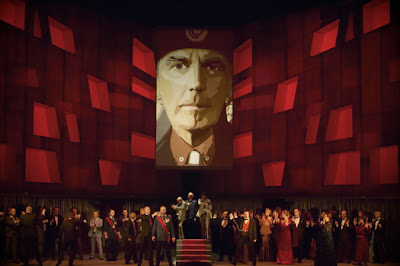 Don Carlos is one of my favorite operas, as I know it is of many people. The Met seems to do Don Carlo, but with the Fountainbleau scene, which makes more sense to me, as I can't imagine leaving that scene out and having the opera make any sense. I also wanted to give my vote to Kaspar Bech Holten as a director, as I had seen his Genoveva by Schumann at Bard College in NY in the summer of 2006. I could find no way at the time to contact him to perhaps speak to him after the performance, and I'd have liked to because he was an early member of an operalist I subscribe to, so I feel very proud of his accomplishments and hard work.

I got to see this production a little later in the run. Susanne Resmark as Eboli was just amazing as was Irene Theorin in my opinion. With some help from the gods of opera the singer in the part of Filip II was ill so in his place I got to see Stephen Milling. A close to perfect cast even though the tenor was a little bland and I got to see the alternate Posa.

With singers of this caliber in the ensemble from their staff of regulars I can almost forgive The Royal Danish Opera for almost no guest soloist next season. Well almost...

Now looking forward to Don Carlos here in Oslo where we will get Rene Pape as well as Peter Mattei as Posa. That's one great night out!

Wow - three of the best Ring alumni! This must have been amazing.