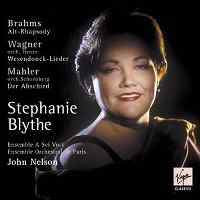 American mezzo-soprano Stephanie Blythe (born 1970) continue to receive rave reviews for her performances, most notably at the Metropolitan Opera in parts such as Orfeo (Gluck), Fricka (Walküre) and Ulrica (Ballo di Maschera). Her European performances are rather scarce, a contributory factor without doubt being her large physique, of which she said in a recent interview:
“If you bring weight into a conversation, all of a sudden that’s the issue. If someone wants to take a chance and cast me in a role that is unconventional physically for me, I applaud them. They recognize the fact that I can probably bring something to the role. When I was given Orfeo at the Met you could have knocked me over. I have seen people who are half my size do a role and look the part and not inhabit the part."

Weight issues apart, this disc documents that Stephanie Blythe has the perhaps most convincing dramatic mezzo-soprano voice of today, with an astonishing depth making one wonder if she perhaps really is a contralto. On this album from 2004, she sings the classic German concert repertoire for her voice type: Wagner´s Wesendonck lieder combined with Brahms´ Alto Rhapsody and Der Abschied from Das Lied von der Erde.

Stephanie Blythe´s contribution to this disc, in short, is simply superb. Not since Christa Ludwig have I heard such a firm and steady voice combined with a wonderfully unsentimental approach. My only quibble towards ms. Blythe´s performance is that her intonation is not always razor-sharp, particularly notable in the Brahms. But what a voice she has..

Unfortunately John Nelson´s Ensemble Orchestral de Paris does not entirely match this high level. Furthermore, much to my distaste, Hans Werner Henzes orchestration of the Wesendonck lieder was chosen for this recording, whose transparent approach I have never felt suits either the Wesendonck lieder in general or Stephanie Blythe´s voice in particular.

Stephanie Blythe with Schmerzen from Wesendonck lieder:
The bottom line (scale of 1-5, 3=average):

completely agree - the last time I saw her in london was at covent garden's semele - fantastic voice. very much hope she does not go down the path of d. voigt.

How ever lovely Ms Blythe may be, a few other singers are superb in this repertoire but have not yet been given the chance to record it; think of the phenominal Petra Lang, whose interpretations of the Wesendonck Lieder and Ruckertlieder are close to perfection....why no record company has recorded these and many other works with her is a sad mystery. BVM