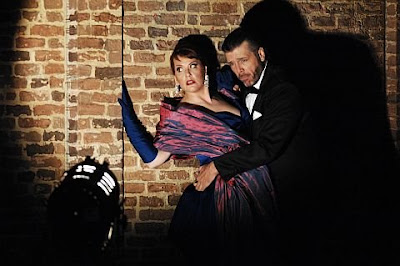 All the ingredients were there: As starry cast, a stylish director as well as a beautiful (and sold-out) auditorium. Nevertheless, the evening never really took off.

Canadian director Robert Carsen apparently was inspired by Cavaradossi´s remark to Tosca “like Tosca in the theatre” after she instructs him on how to play dead. Thus, his Tosca is a theater-in-the-theater production, a concept Robert Carsen has tried earlier with his Hoffmann´s Tales in Paris, and generally a more intellectually rewarding than emotionally thrilling staging concept. Furthermore, this apparently is not a new production, as it appears it has been seen earlier in Barcelona, though information in this regard is not exactly forthcoming from the Zurich Opera website or magazine (read: it seems to be non-existent).

Combined with the creation of stylized Hitchkock-Hollywood images, the result is a production, which emphasizes form over substance, unfortunately draining it of drama. The overly stylized movements by Tosca, artificially coordinated with the music beneath a moving spotlight during the confrontation with Scarpia virtually draws the tension out of this, the perhaps central scene of the entire opera, briefly reminiscnet of the extreme aesthetism of Robert Wilson.

In brief, we are in a theater. As Act 1 opens we look at an operatic theater from the back of the stalls – plenty of chairs, Cavaradossi decorating the auditorium, while the curtain (of the theater-within-the-theater) finally goes up under the Te Deum to display Tosca in full stage regalia. For Act 2 we move backstage to a smoking Scarpia beneath a large VIETATO FUMARE sign, staring at a large painting of Tosca. All in a very aesthetic mix of period costumes on a virtually bare (back)-stage.

Tosca is a stylized 1950´s hollywood diva. A superficial diva, who enjoys both the spotlight (literally) and the attention from Cavaradossi as well as Scarpia while distractedly looking at the programme notes of this evenings Tosca performance..Theatre within theatre indeed.

While Cavaradossi, the only genuine character in this set-up, is the real victim: Presumably intended to be younger than Tosca (he is in real life as well), he is the only one displaying genuine emotions in his unconditionally love for Tosca and sings about his loneliness to a pitch-black auditorium from the naked stage in Act 3, into which Tosca finally jumps with her audience now vanished. It is both aesthetic and stylish. However, compelling music theater it is unfortunately not.

Despite the presence of the undisputed leading Cavaradossi of the day in Jonas Kaufmann. What does he not have? Nothing it seems. In looks and acting, he is the perfect romantic hero. He even has that barytonal glow to his voice, which does make him push for the top (as Plácido Domingo always has), but has the benefits of gaining more punch to his interpretation.
Thomas Hampson´s lyric baritone does not, on paper, seem ideal for Scarpia, though he projects the dramatic lines of the part surprisingly well. As a villain, however, he does not convince, though I am not sure Scarpia is really intended as such in this production, rather as a man, fighting with another man over a woman.
The vastly underrated Emily Magee made her role debut as Tosca, and sings the part better than anyone I can imagine today, Karita Mattila apart. The lack of emotional connection with her character may probably mainly be attributed to Carsen´s approach of the work, and it would be interesting to see her in another production. At the Met, perhaps, where her debut has been more than overdue for about a decade?
Effective, though not overly detailed, playing from the orchestra under Carlo Rizzi.

An evening, where, unfortunately the sum was somewhat less than the individual parts put together.

Glad you liked that Tosca, I'm pretty envious !!;) I'm always like that whenever Jonas Kaufmann sings Cavadarossi and I'm not there to hear him , jejeje.

By the way, this production was premiered in La Fenice, not in Barcelona. I don't know Emily Magee's age...but I don't believe she is much older than Jonas...is she ?

I think she is a little older than him.

According to the programme of Lisbon's Teatro de São Carlos, where this production was seen in May last year with Elisabete Matos starring as Tosca, it was originally staged in Belgium at the Vlaamse Opera in 1991.
Look here and here.

Dissent only slightly in that I would put Magee at a full 5. Don't actually disagree with your slight criticism but she just has that much of a margin for error.

just passing through. Thanks for the review, and lucky you, at least you got to hear Mr. Hampson. I travelled to Zurich just to hear him live, and chose the performance where he called in sick. :-(
Kaufmann was a treat, indeed.
And for the sake of completeness, the production has also been to Hamburg. They are weirdly insistant at the Zürich opera house on calling it new, even when Gallo was flown in, they said in the announcement he'd sung in "a similar" Carsen production of the piece four years ago. Funny that, in times of the internet, paople should believe it. ;-)