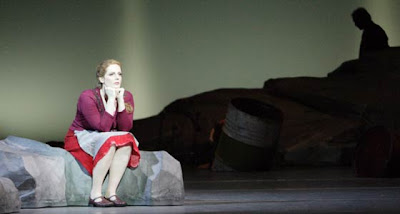 That Eva-Maria Westbroek (born 1971) spend the initial years of her career with endless and futile auditions leading her nowhere must make one or another opera administrator reflect just a bit as she is now establishing herself as the probably finest jugendlich-dramatische soprano of today. With a wonderful blooming quality of her voice, Eva-Maria Westbroek furthermore is a terrific actress, making it virtually impossible to not be deeply moved by this Jenufa´s fate.

Equally convincing were both leading gentlemen, particularly Stefan Margita´s superbly sung Laca, but also Joseph Kaiser as Steva. While Deborah Polaski may have more voice for the part of Kostelnicka that many of those who sing it today, a stronger stage presence (never her main asset) would have made a major difference, particularly in a character part like this. Curiously, Helga Dernesch, whom I thought belonged to the past, took the part as the Old Burya.

As the entire cast were excellent actors, it was rather disappointing how little use Barbara Frey made of them, with a rather uninteresting personenregie. She has updated Jenufa until present day, but provides little more than a traditional static theatric setting without the true interpersonal drama, which Janacek´s opera seems so full of.

Massive applause to conductor Kirill Petrenko, though I fail to see entirely why. The orchestra sounded both transparent and beautiful, but way too passive and bloodless, at least to my taste. In fact, the style of playing reminds very much of Kent Nagano, hardly a coincidence, as he is music director of the house. Why this sort of bloodless playing is so admired in Munich, is rather strange, at least to me. And even more so when Kent Nagano conducts Parsifal. But that is another topic altogether. 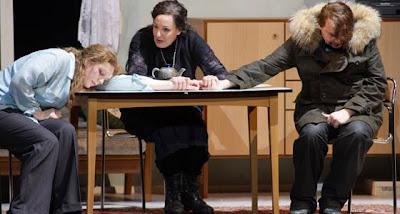 Haven't seen this production, but I'm quite sure that Westbroek stole the show. She such a fantastic singer, would really like to hear her as Jenufa. Btw. she seems to be having the far too late break-through similar to Kaufmann (he's '69. she's 71)
As for Kostelnicka, I guess that today probably the best one around is Agnes Baltsa, can't imagine that Polaski would come even close to her.

I assume you mean that as the year's of their birth not their ages?!! If the latter I can only assume their must be a couple of fairly scary portraits in their respective attics!
For me the best ever Kostelnicka was Silja at Glyndebourne

curzon I guess, that was obvious. Though, it was probably more clear, before mostly changed her post, since she was initially not sure about the exact year in which Westbroek was born

Yes, and I probably shouldn´t do that without any indication whatsoever...though it does seem rather obvious to me that Eva-Maria Westbroek is not 71 years old..

well she definately didn't look that way, at least the last time I've seen her in theatre, which was last year:)

It was a joke...clearly it fell on stony ground!
I assumed that the reference to Dorian Gray would be enough to give the game away!

why doesn't dernesch get a rating? it wouldn't be too late!