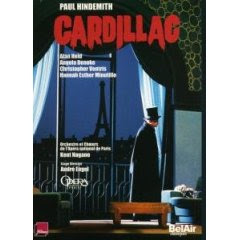 Apparently this was the most expensive production of the season when it opened at the Paris Bastille Opera in the fall of 2005. And it is indeed spectacular: Set in Paris around the time the work was written (1925), the overall impression is art déco, with sweeping scene changes from glamorous hotel foyers to city roofscapes and then on to the rooms and hotel suites of upper class Parisian life. Immensely stylish and glamorous. With more than a touch of Alfred Hitchcock. And with the typically French sense of underplayed elegance. Just take a look at the DVD cover (pictured above).

Premiered in Dresden in 1925, this is a psychoanalytically-influenced short (90 minutes) opera about the goldsmith Cardillac, who murders his customers, but is caught in the end. Hindemiths music is light, bordering on the neoclassisistic, and receives a transparent reading from Kent Nagano.

Alan Held convinces as the murderous gold smith Cardillac, as well as Angela Denoke as his daughter and Christopher Ventris as her future husband.