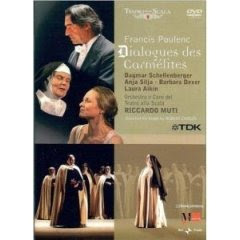 This 2004 La Scala production of the Dialogues des Carmelites is simply close to ideal. And the aesthetically beautiful and simplistic Robert Carsen production was deservedly elected opera DVD of the year by the BBC music magazine last year.

Poulenc´s music is simple and beautiful as well as tonal and easily accessible, though not without disturbing undertones, effectively underlined by the Scala Orchestra superbly conducted by Riccardo Muti.

The opera takes place during the French revolution, and is the story of the young aristocratic woman Blanche, struggling with a fear of death, who joins the Carmelite Order. Through her meeting with the old prioress and the other nuns, Blanche overcomes her fear of death to a degree that she volunteers to follow her fellow sisters to the guillotine when they are apprehended by the ”revolutionary” forces at the end.

The stage is empty, all wear 18th century dress, and Robert Carsen emphasizes the human drama with contrasts in light and colouring as the only stage effects.

All the (predominately female) cast are excellent, in particular Dagmar Schellenberger as Blanche, who delivers a compelling portrait dramatically as well as vocally, as well as Anja Silja (the old prioress) who dominates her scenes by strong presence. The scene between Blanche and the old prioress as well as the death of the old prioress are the absolute highlights of this production. Also strong performances from Laura Aikin and Barbara Dever in a cast without weak links.

You probably have not seen the other DVD of "Dialogues" by Opera national du Rhin (1999) on Arthaus.

I would like to make a few points about the Rhin production. The set and the costumes are equally minimalist, stark and extremely effective. It feels like a much more intimate production with the singers and the orchestra very well balanced. The singing and acting are wonderful. There is a much better flow and momentum to the piece. I found that the cutting from the dim stage to the brightly lit Muti conducting in the La Scala production was quite jarring and greatly interfered with the atmosphere and momentum.

The Rhin production, directed by Marthe Keller, did not have any weak links, flowed seamlessly, and very clearly demonstrated the moral issues addressed by Poulenc.

If you gave the La Scala production a 5, I woulld suggest a 5+ for the Rhin production.

I've seen this production live, in Vienna, and I can tell you that the change from dim stage to bright one, doesn't really look that dramatic as on DVD. it actually fits quite well the production.

What I noticed watching this production live (Toronto last week) was how much more menacing the crowd is than on the DVD. The ending too seemed more shattering live than one can manage on disk. Still, this is a fine recording and comes close to doing justice to the production.