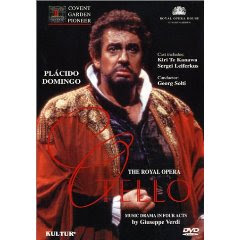 On Moshinsky´s production it can be said that it is traditional, however on the minimalistic side avoiding the excesses of a Zeffirelli.

On Plácido Domingos Otello I offer nothing which hasn´t been put in writing numerous times already: In my opinion, Otello is his best part, in which he has been unrivalled for about thirty years and his performance here could not be bettered. A superb singing-actor with Shakesperean singing and acting. Opposing him is Sergei Leiferkus, who presents a vocally convincing characterization of Iago, however with a weak stage presence entirely without menace.

While Kiri Te Kanawa vocally is fine as Desdemona, though without the bloom or vocal expressiveness of a truly great one, she is, in my opinion, among the most boring singing-actresses to have had a major career. There is no chemistry between her and Plácido Domingo, something I am not inclined to blame on him. She is far inferior to both Barbara Frittoli at La Scala and Renée Fleming at the Met on the competing DVDs featuring Plácido Domingo as Otello.

Sir Georg Solti, on the contrary, is inferior to no-one being typically explosive and dramatic. Furthermore, he manages to shape the lyric phrases as well and creates thrilling dramatic intensity in a way Riccardo Muti may only dream of. It may be his 80th birthday, but he conducts as if he was half that age.

Plácido Domingo aso Otello is the way to go on DVD with the choice between this version, the MET and Scala. Personally, I´d opt for the Scala version.