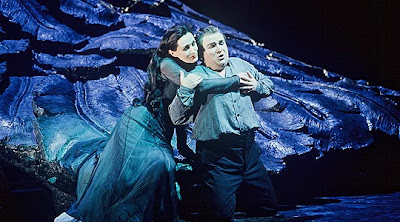 The original cast for this performance was Peter Seiffert, Katarina Dalayman and Christof Fischesser. We heard Ian Storey, Waltraud Meier and (as a last-minute replacement) Matti Salminen. I have not heard anyone complain about these substitutions yet...

Much may be (and is) said of Daniel Barenboim. And whatever one may think about him or his accomplishments in other fields, or with other composers, there is general agreement that it is with Richard Wagner, that he truly excels.

While all his Wagner interpretations are genuinely top-class, Tristan and Isolde may represent the sum of his achievements: The electricity he generates from this score, in my opinion, is unmatched by any other conductor alive today.
In other repertoire, he may sometimes give the impression of going for the superficial effects. Not here. He completely masters the structure of the piece – the endless waves of the music, pushing forward relentlessly. Never loosing the big picture it was simply a thrilling performance. I suspect there to have been next to no orchestra rehearsals for this performance. Barenboim may not need it, but the brass section could have used some coordination of their entries, to put it mildly.
The advantages of the Berlin State Opera acoustics to the Bayreuth Festival House with regards to Barenboim´s interpretation of Tristan are obvious: In Bayreuth, the sound generated by the covered orchestra pit softly emerges from underneath blending uniquely with the singers, but you do not get the explosions in the orchestra possible here in Berlin.. This was a more edgy interpretation from Barenboim, compared to the Scala performances earlier this season, and he seemed to be experimenting with the woodwinds as well, leaving some of the rounded, ”Italianate” sound of the Scala performances behind. The result was completely compelling.
I believe I have stated so previously, but I have never heard better conducted live Wagner performances in my entire life than the ones Daniel Barenboim conduct at this house. Not even by Christian Thielemann, who sometimes does get close, though.
Of course, this performance was sold out. Apparently due to practical staging issues related to the company´s previous tour in Japan, this was a presumably one-time performance of the old Harry Kupfer production, as it was thought the new Herzog production would be back next season (which now doesn´t seem likely).
Waltraud Meier. I have never seen her deliver a performance that was anything less than completely compelling. Her interpretative powers, acting skills and pure presence on stage is of a magnitude that whether or not she exactly does hit all the notes precisely on pitch becomes completely irrelevant. The Narrative and Curse was probably the highlight of the entire opera. The variety in acting and word-colouring, the way she and Daniel Barenboim within micro-seconds adjust their tempi to each other was thrilling to watch.
And though irrelevant, she did in fact hit all the notes, the Cs somewhat more briefly than usual, and she was slightly sharper than usual in her high register. But the Liebestod, as always, completely on-pitch and with heart-breaking intensity. In the middle of a European recital tour, she understandably was cautious with her voice at the beginning, and only in the third act did she give the usual 100%, she would doubtless have given here from the start had she been able to plan her schedule around this performance.
As I´ve said before, in my book, she delivers the definitive interpretation of Isolde and I genuinely have no desire whatsoever to see anyone else in this part. Except for maybe Karita Mattila.
I heard Ian Storey´s Tristan earlier this season at La Scala, and his interpretation clearly benefits from this smaller house. Unfortunately (for me) there is a certain vibrato in his middle voice, that I genuinely dislike, but compared to the issues most of his Tristan-singing colleagues have, he has plenty of assets: He is an excellent actor. He convinces dramatically in the part. Furthermore, he looks quite good, and vastly better than most other Tristans around. He does have the high notes. He didn´t seem too tired i the third Act. He could go on to have a major career with this part. And those issues apart, he had superb on-stage chemistry with Waltraud Meier.

As the King Marke you would normally expect for this kind of performance is in New York, and the scheduled Marke Christoph Fischesser was ill, Matti Salminen was flown in from Zurich at the last minute. Matti Salminen´s interpretative powers as King Marke are of a magnitude, that he even after singing several bunches of completely wrong notes in the Monologue he delivered a compelling portrayal.
Michaela Schuster iwas a fine Brangäne. Not a beautiful voice, but effective and ways better than her dry and wobbly Venus last month. Though is´s still not obvious to me why she has to move on to Ortrud now (in both new Lohengrin productions in Berlin and Munich next year).
Roman Trekel as Kurwenal did not seem in very strong voice, and I wonder if these dramatical barytone parts really suit him?
And a curious thing: There was a lot of Chéreau in this production. In particular when Ian Storey covered Waltraud Meier´s eyes at the beginning of the "O sink hernieder" in Act 2. Unless, that of course was Kupfer´s orginigal intention? Also in several situations in Act 1 it seemed (fully understandably) like Ian Storey had imported Chéreau´s (excellent by the way) concept.
I don´t remember the last time I´ve seen standing ovations like this at the Berlin State Opera. Most were for Waltraud Meier, Matti Salminen and Daniel Barenboim.
If Daniel Barenboim doesn´t conduct the Tristan and Isolde next year in Berlin, one almost have to consider visiting the Metropolitan Opera to hear him there. Without Waltraud Meier though…
Posted by mostly opera... at 00:10

"Next to no orchestral rehearsals" - really? If true that would seem more than a little presumptuous for a world-class stage in front of a sophisticated audience that included the likes of our blog hostess. There is no doubt the musicians are familiar with the music and the principals have played together many times, but still ... I mean, it's not like these folks just sit around thinking about Tristan all the time. They do play Mozart and the other guys once in a while, too. Matti Salminen may have been shipped in FedEx, but the others were presumably around and could have benefited from a little practice time to wrap their collective heads around Wagner. I know if I had bought a ticket I would like to think the performers were practicing for at least a week ... whether they need it or not. ;-)

As I said- I SUSPECT there to have been very few, but I don´t know precisely. I wouldn´t be surprised if Daniel Barenboim just went straight ahead without any rehearsals at all, though.
Thinking of the Don Giovanni premiere in December, where I positively know that Daniel Barenboim arrived in Berlin from Milan the day before the premiere, having assistants taking care of rehearsals - believe me, the lack of rehearsal time with him was quite obvious at the premiere, as I´ve mentioned previously.
I´d be curious to hear if anyone actually knows anything about the numbers of orchestra rehearsals for this Tristan?

On a related note, I know that the Deutsche Oper Lohengrin revival last weekend had 2 weeks of orchestra rehearsals, but I find it very difficult to believe that Daniel Barenboim would take 2 weeks out of his schedule to rehearse a one-time revival Tristan, without DVD-release or anything similar, in Berlin..

Agree in respect of Meier being the preminent Isolde. I heard only once (circa 2001) with Barenboim and the CSO in concert and in by far the worst voice I've heard her in (I'm not refering to the usual problems - she was a superb Kundry at the Met 2 years ago when those problems were apparent but did not detract from the performance). Even in concert and even in serious vocal distress she was clearly superior to the other Isolde's in my experience (Eaglen, Voigt - Vienna, met and Baird - all of whom - even Baird offert superior vocalism to what she had on that particular evening).

Salminen was a perfectly excellent Mark at the Met in March and Pape was, for once, not missed (although more on that above). In any case I just get back from hearing him in some Mussorgsky songs and Boris dialogue so in this particular instance you minimal loss was our huge gain - heas superb, of course.