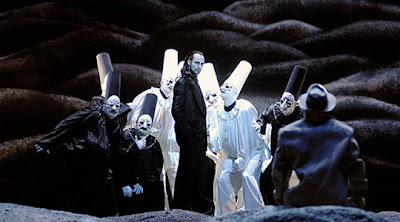 Peter Mussbach´s stagings are never less than aesthetic and beautiful, achieved mainly by a keen sense of mixing appropriate colors and light projections on a relatively neutral background. In this respect Doktor Faust is among his most successful productions, originally seen at the 1999 Salzburg Festival and also presented at the Metropolitan Opera 2000-1 season: The spare, sometimes hilly stage is populated with various figures in dusty matching colours and fairy-tale costumes including a Duchess in golden dress surrounding the trench-coat clad Faust, who seems perpetually on the move.

Visually, the production is absolutely compelling. Otherwise, I simply lack some theatrical energy. The production presents itself as dreamerish and fleeting, but then that would seem to be Peter Mussbach´s point. According to the program notes (without the notes, the point of the production would have escaped me) Faust undertakes a "virtual journey'' like a ''daydream without reality.'' And that dreamish, unreal quality is certainly captured here.

Dreamerish and docile are not words I´d normally associate with Daniel Barenboim, though this is how his reading of this score appeared. The textures in Busoni´s music shift between the dense and delicate, and it was indeed played delicately here. I never thought I´d attribute lack of energy to Daniel Barenboim either, but it did seem like he was sleepwalking his way through this performance. In the spirit of Mussbach´s staging, I suppose.

Roman Trekel´s characterization of Faust was obviously not helped by the production, having him endlessly pace the stage in his black trench-coat, occasionally lighting small fires in the ground. He has a fine voice though, and none of the manners, that sometimes tend to make Thomas Hampson (a superb Doktor Faust in the Zurich production by Grüber, as well as in the previous MET performances of this staging) irritating. John Daszak was quite simply superb as Mephistophéles, and the only one to infuse some real energy into the performance.

The auditorium was only half full, and I suspect quite a few of those not deciding to skip opera altogether and enjoy the fabulous weather, went for the Lohengrin revival premiere over at the Deutsche Oper. I would normally have been there as well, but you never know when another opportunity to see this staging comes up again, which considering the present situation at the Berlin State Opera, may well be never.
Posted by mostly opera... at 13:40

As I director, I generally do. And I haven´t even mentioned his best work, imo: The superb La Traviata, showing us the dying Violettas road towards her death....

Regarding Mussbach´s current problems at the Berlin State Opera: I don´t think these are entirely his fault - after all it was Barenboim who initially hired him, and that they disagree on how to spend the money (Mussbach on the house - Barenboim on the orchestra in brief) can surprise no one.

Mussbach may not be a superb opera administrator, but navigating between Barenboim and the authorities is no easy task, especially if you have artistic ambitions yourself. And since Mussbach is dispensable and Barenboim is probably not, Mussbach will have to go. But I don´t think Barenboim is pure as an angel in this game either.