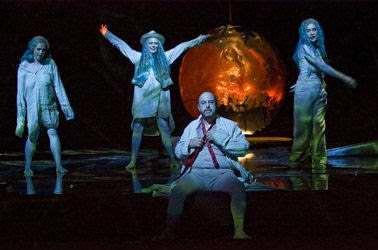 Keith Warner´s London Ring is an eclectic mix of ideas seemingly borrowed from others: A bit of psychoanalysis, some Harry Kupfer, plenty Götz Friedrich. According to Keith Warner he is ”spinning the plate of microcosmos and macrocosmos simultaneously”, creating an universe where ”Strindberg/Ibsen meets the poetic universe of Greek drama” challenging ”the continuous power and existence of the Judaeo-Christian God”.

With dark sets carved out of a Strindberg play, a room with a spiral in the middle is a constant feature. The rooma apparently symbolizes Wotan´s mind as the spiral creates a vertical axis communicating with other rooms of Rhinemaidens, Valhalla, Nibelheim etc. Through the spiral a shining globus is attached to a red wire (another constant feature) symbolizing the Gold.

Alberich´s human experiments in the Nibelheim room are easily worthy of a Nazi camp. Wotan is not too noble either, continuously trying to manipulate with everyone to his own means.
However, humour and irony is also present in this Rheingold, quite apparent in Philip Langridge´s excellent Loge, making no efforts to hide his contempt for the Gods, constantly scheming to make Donner and Froh look like the ignorant fools they probably are, and forcing Wotan to chase him desperately to get his hand on the last golden apple after Freia´s involuntary departure.
The idea of placing normal-sized giants in front of two large projected shadows worked out well, as did the Nibelheim and Tarnhelm scenes (for once): The Tarnhelm was a white cube, both enlarging (so he embraces the entire stage) and diminishing (crawling on an elevated part of stage) Alberich.

I would like to see Alberich for once portrayed as a worthy adversary to Wotan instead of a clown. Unfortunately, Keith Warner´s Alberich is the usual fool, though well sung and acted by Peter Sidhorn.

Generally, the singers were good, although none were truly exceptional. Too much sprech-gesang for my taste on the parts of both Gerhard Siegel, Philip Langridge and Peter Sidhorn. Sir John Tomlinson’s strengths, such as dramatic projection and characterization may come better to their rights in Walküre than in the higher-lying legato-dominant Rheingold-Wotan. However, he commands the stage as ever and is well matched by Rosalind Plowrights Fricka. Catherine Wyn-Rogers made me wonder, how it is that Erda is such a difficult part to cast.

While Anthony Pappano does not dazzle with insight into Wagner´s score at the level of Thielemann or Barenboim, his conducting is nevertheless clearly far above average: His tempi are brisk, he is relatively straightforward, not overly dynamic and he follows the singers closely. In many ways he reminds of Joseph Keilberth conducting as heard on the recently released Testament Ring: Somewhat superficial, but never inadequate or boring.
Posted by mostly opera... at 22:13

Your restraint on Terfel one could say was admirable but his presence was still felt. The Rheingold and Walkure costumes for Wotan suited him much more than they did John Tomlinson especially in Rheingold. Similarly I couldn't see Terfel in the costume of the Wanderer that so perfectly suited John Tomlinson. The Rheingold Wotans John did for Kupfer and Jones were much better vocally and costume wise. The bleeding eye and the blood on the surgeon's jacket were superb touches in the Jones Rheingold. For me the Wanderer because it exposed John's voice in parts was a masterpiece comparable to McKellen's Lear.