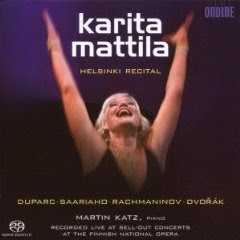 From the moment of the eerie opening of Duparc´s L´invitation au voyage you know that this is very special recital. Performing in front of an electric sold-out Finnish National opera, Karita Mattila accompanied by Martin Katz simply gives one of the most moving and exciting vocal discs I´ve ever heard.

Karita Mattila starts out with five songs by Duparc, creating an almost eerie sense of expectation as well as being perfectly suited to expose her velvety middle register. Followed by Kaija Saariaho´s song cycle "Quatre instants", which is written for Karita Mattila. Set to the poems by Maalouf these songs bring Karita Mattila to the absolute limits of expressiveness. She clearly gives everything and stretches her voice to the maximum. Songs by Rachmaninov and Dvôrak (Gypsy Songs) make up the remainder of the program, all displaying Karita Mattila at her best - a little raw, never polished, maximally expressive and with a middle register without competition today. All splendidly accompanied by Martin Katz.

I cannot recommend this disc highly enough. If you are only going to buy one recital disc this year, make it this one.

Sorry for being so ignorant. It says on the Amazon.co.uk page that this is a "Hybrid SACD". What's that? Will I be able to play it on my regular CD player?

More information on hybrid SACD here: http://en.wikipedia.org/wiki/Super_Audio_CD
(I didn´t know exactly what the meaning of it was either)
Yes, it plays on a regular CD player.