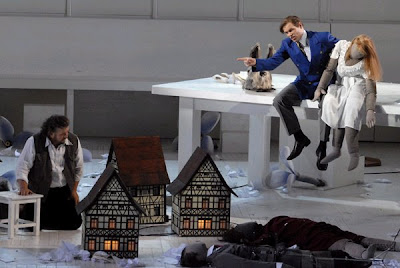 For American tenor Robert Dean Smith, it all ended in the living room of Hans Sachs in the third act of the premiere of Claus Guth´s Meistersinger at the Dresden Semperoper.
Despite Hans Sachs (Alan Titus) offering him a glass of water, the voice was simply gone in the middle of the Prize Song. Raymond Very (who?) quickly jumped in and finished both Prize song and opera, without conductor Fabio Luisi missing a single beat.

Reactions to controversial director Claus Guth´s staging were, as always I may say, mixed: According to the various media, he takes Meistersinger very seriously, follows the text meticulously and focus on rebellion within a closed community as well as Eva´s relationships with both Sachs, Walther and Beckmesser, none of which are taken lightly.

Claus Guths Meistersinger is no comedy. Stark reality is present underneath the surface. To further the interpretation, each singer was represented by a double-puppet as the chorus held small Nürnberg houses in their hands on an otherwise almost empty stage.
Uanimous praise in the German press for Bo Skovhus in his debut as Beckmesser, Fabio Luisi´s conducting and Robert Dean Smith/Raymond Very as Walther. 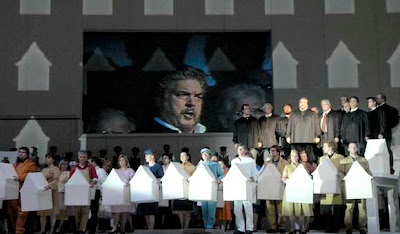 Photos by Matthias Creuziger for the Semperoper from Richard Wagner Werkstatt

This is not for me!