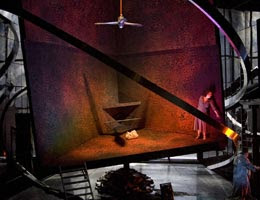 I thought he was good when I heard him in Munich this July. But that was nothing compared to his Siegmund in the Royal Opera performance of Walküre yesterday. Plácido Domingo, despite his 67 years, is quite simply still the best Siegmund around. While he occasionally may be stiff on stage, his voice was as beautiful as ever, with a distinct glow, no barking or yelling and an effortless "Wälse" cry. Even his German diction seemed better than usual.
He was accompanied by Eva-Marie Westbroeks wonderful Sieglinde, which, Waltraud Meier apart may not be seen better on stage anywhere.
Stephen Milling is equally unrivalled as an astonishingly evil Hunding with superb command of the stage. His laughter after Siegmunds murder is simply spine-chilling. And when he dies, he falls flat on the floor being stabbed in the chest by Wotan: Chest and head hit the floor with a major PLUNK resulting in scattered audience whisper along the lines of "wauw - that must really have hurt".

No, Sir John Tomlinson does not have the top notes, and his vibrato is far too large when he is strained, but in large parts of the Walküre he isn´t and when he is on, he simply commands the stage, which counts for a lot. Such as in one of the best monologues I have heard. A roguish Wotan, but one you cannot help feeling sorry for despite his inadequacies. That his voice isn`t really suitable for the "leb wohl" anymore, I`ll just forget.
Fine performance also from Susan Bullock (replacing the indisposed Lisa Gasteen) as Brünnhilde. While her acting seemed a bit neurotic, she looked the part, did not tire and did not have a too unpleasant vibrato.

Keith Warner’s Room of Wotan´s mind continues to be the center of action, with the vertical spiral in the center and a white fan on the ceiling creating an oppressive atmosphere of A Doll House (Ibsen).
In the second act we are at the bottom end of the spiral, with the previously mentioned red tread guiding Siegmund and Sieglinde´s flight, while Wotan anguishes and throws furniture around. For the third act, Keith Warner operates with a symbolic door through which Siegmund´s body falls. The fire, which continuously has malfunctioned, was working. But only just, as it seemed to stop half-way up the spiral case, though finally decided to continue as scheduled.

Antonio Pappano repeated his excellent performance from Rheingold. Brisk, energetic and attentive to detail as well as to the singers.
Posted by mostly opera... at 16:58

Thank you for that report!