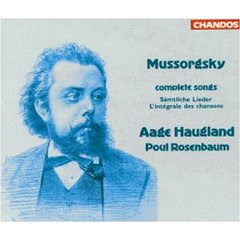 Released only one year before his much too early death, the great Danish Bass Aage Haugland presents a complete recording of Mussorgsky´s songs, accompanied by Poul Rosenbaum on piano.

For me, this recording probably means the end of a long search, though it may not be for everyone: Aage Haugland´s voice, though not beautiful, comes close to a traditional Russian-style profondo complete with yelling and sprechgesang. Haugland´s main assets were his eminent sense of characterization as well as an overwhelming presence on stage, both convincingly conveyed in this 3 disc set.
Though I do not speak Russian, upon listening to these songs, I immediately felt what they were about as the moods of each one of these songs are precisely delivered: The song of the drunkard, the fly, the devil, on melancholy etc.
We are far from bel canto style. Often, in the upper ranges, where Haugland is most uncomfortable, he diminishes his volume to almost a whisper. Alternatively he yells. However, the characters are drawn with a pen as sharp as anything I have previously encountered in this repertoire and brought to life as rarely heard.

The obvious comparison is with Boris Christoff and comparing the two in a classic like the "Song of Mephistopheles" precisely pin-points the difference in approaches: Christoff with his booming, almost monotonous thundering bass, with elegant and beautiful ornamented characterizations versus Hauglands raw bass and intense raw characterizations, at times even yelling and making strange sounds according to the textual elements. Sergei Leiferkus has recorded the complete Mussorgsky songs as well, but though much speaks in his favor, I feel the songs lack the characterization Aage Haugland provides.
Posted by mostly opera... at 00:27