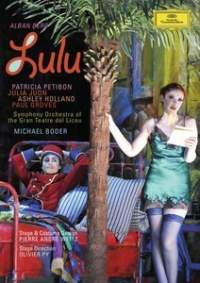 I remember all sorts of pre-opening hype when this Lulu production originally was seen in Geneva in 2010, attached with a warning for those under 16. Not unexpectedly, the production really does not live up to all this hype. Yes there is (semi)-nudity as well as prostitutes and weird sex scenes, but most of all Olivier Py has created a somewhat over-stuffed production.


The overstuffing consisting mainly of the confusing background, resembling a look at a seedy neighbourhood complete with prostitutes in action, a Parisian wheel and flashing signs reading the likes of “mein Herz ist schwer”, “I hate sex”, “sexe”, “comme toujours”. The action, then takes place in front of this colourful tableau where additional colours, disguises etc. are added.

Visually it is quite arresting. Especially as the DVD camera angles change intermittently and you thus zoom in on various aspects of this spectacle. But as to Olivier Py´s take on the story? What is his take on Lulu? What does he want to tell us? Apart from Lulu being a woman of changing shapes, that is. That I am not sure.

In many ways, Patricia Petibon is a wonderful Lulu. Her acting is stunning and she has a special dignity and allure, which is quite rare and makes ones eyes glued to her. Vocally. she does seem to be stretched out rather thinly. While her middle register seem rather solid, in the high register many notes comes out close to screening.

Ashley Holland is a convincing Dr. Schön, Julia Juon very good as Countess Geschwitz, and also Franz Grundheber as well as Will Hartmann convinces in minor parts. Only occasionally did Paul Groves seem overparted as Alwa.

As for the orchestra, Michael Boder really does not make them their best. His reading of the score fails to draw out the melodies and themes that glue this piece together. Vastly inferior to both Andrew Davis on the previous Glyndebourne DVD as well as Antonio Pappano on the new DVD from Covent Garden. Another alternative could be the previous Zurich Opera production, which however uses the two-act version and not Cerha´s instrumentation (staged first 1979 in Paris) used here.

Personally, I´d probably still go for the Glyndebourne DVD, however none of the available versions are bad options, depending on personal preferences.

Thanks for these reviews! I've been following for a while, and actually have a question for you about one of your older posts on the Copenhagen Ring cycle. I would have contacted you directly, but can't seem to track down an email address from your profile page. Do you happen to remember how Holten achieved the flashbacks on stage during the actual productions (i.e., as opposed to how these were done on the DVDs)? I know it's been a few years, but you mentioned seeing it in person and I've had trouble tracking this information down. Thanks!

Hey Christy,
Could you tell me exactly what flash-backs you talk about? In that case I may find them on the DVDs and see if I can help you. Thanks

One of the longest ones is on the first DVD of Götterdämmerung, about 32 minutes in. On the DVD, this is done with matting or layering two different clips. The flashbacks often appear during the orchestral passages and interludes. Thanks so much!