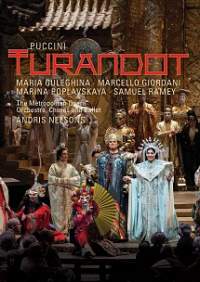 As Metropolitan HD transmissions often resulting in DVD releases, and as several HD transmitted operas already have been released on DVD, some of the new DVDs from the Metropolitan Opera feature productions already available on DVD. They did it with Manon Lescaut for no obvious reason and now again for this Turandot, again for no obvious reason. Last time around on DVD, the highlights were James Levine and Plácido Domingo. This time, the highlights are Andris Nelsons and Marina Poplavskaya.

Though somewhat dusty this is by far not among the worst of Zeffirelli´s Metropolitan Opera stagings, with quite spectacular sets for the first two acts, as I also commented in my review of the previous DVD of this production.

Maria Guleghina, has stage present and strong middle range, but entirely lacks the shining top of Lise Lindström, who in fact made her Metropolitan Opera debut in this run of Turandot, but unfortunately did not perform in the HD transmission, which eventually became this DVD release. And while Marina Poplavskaya does not have the biggest voice, she is a wonderfully moving Liu on stage. And while Marcello Giordano, as usual I´d almost say, hits the notes, the reason he is not a household name is clear: Lack of X-factor.

Interestingly, the Metropolitan Opera comprimario veteran Charles Anthony, who just died earlier this year was the Emperor, in which was his last run of performances at the Met after 57 years and more than 2900 appearances. During the intermission interview he named the debuts of Marian Anderson and Leontyne Price amongst his biggest experiences at his Met career.

Of Samuel Ramey, I´ll only say that he was amongst the very greatest basso cantantes of the century, but if he intends younger audiences to remember this, now is the time to retire.

Video clip of most of Act 2: Riddle scene to Liu´s death: