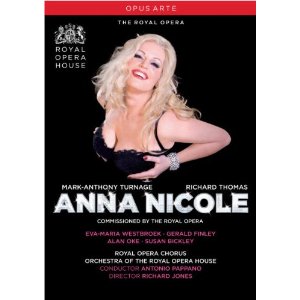 To summarize: Vickie Lynn Hogan aka. Anna Nicole Smith was born in 1967, grew up in a small Texas town, dropped out of high-school, married at 17, gave birth to her son Daniel at 18, separated a year later, embarked subsequently on a Playboy/modelling career, married oil tycoon (and 63 years her senior) J. Howard Marshall, who died 13 months later in 1994, spent the rest of her life battling over his estate while she continued to put on weight and abuse drugs, found her 20-year old son Daniel dead in her hotel room in 2006, gave birth to daughter Dannielynn the same year and died the following year.

In summary, the worlds first reality star, one might say.

And a life told in a little under 2 hours in composer Mark-Anthony Turnages fast-paced opera, receiving it´s much-hyped world-premiere 2011 at the London Royal Opera House. That jazz remains one of the main influences of Turnages compositions is quite obvious and he has produced a score, which entertains, but which I doubt would be sustainable in itself.

The libretto is a major accomplishment by Richard Thomas (of Jerry Springer - the opera) effectively using a choir of journalists continuously present to comment on the action, playing on rhymes while incorporating the most swearing ever heard on an opera stage.

The staging by Richard Jones quite brilliantly underlines the score, presenting Anna Nicoles life in small fragments: Meeting her first husband in a diner, having her breasts augmented, wearing Jimmy Choo´s bought by J Howard Marshall, being interviewed by Larry King etc. All the while the journalists who gradually zoom in on her life metamorphose into black-clad anonymous camera-men. For Anna Nicoles life was a life led in public. And she is not ridiculed, but rather portrayed as a woman without real control over her destiny, be that true or not.

Eva-Maria Westbroek is absolutely smashing in the title role. Obviously helped by her uncanny likeness to Anna Nicole, but most of all she manages to display the insecurities as well as the brassy, publicity-seeking behaviour.