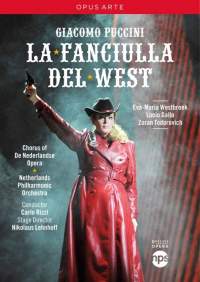 Director Nikolaus Lehnhoff: “The American Way of Life, lightly satirised, lies at the heart of our production: it is an adventure that takes place somewhere between Wall Street and Hollywood”.

Essentially, I´d agree with his characterization, though in several scenes I´d substitute “lightly satirised” with “quite heavily satirized”: The exaggerated use of money, just to mention one example, which rain on Dick Johnson and Minnie, when they finally depart in search of a better life. Minnie´s home in a pink trailer is not exactly underplayed either. But essentially, the core of the opera remains that of Puccini´s initial intentions: It is still about Minnie and her search for love.

The audience applauded the rather weird third act sets of a car park cemetery (do we really do this in Europe?) where Eva-Maria Westbroek descended through a long flight of stairs like a glamorous Hollywood star of the 1930´s. According to Eva-Maria Westbroek, this is her favourite role. And really, this evening was Eva-Maria Westbroeks show. With wonderful sensitivity and an immensely touching stage presence it is hard to imagine a better Minnie. I have heard say that her high notes do not bloom, but really, the notes are they are all there, secure and on pitch as well. Combined with a wonderful vocal flexibility, just right for Puccini.

None of the men reached that level, though both Zoran Todovich and Lucio Gallo look their parts and act convincingly, however slightly vocally overparted.