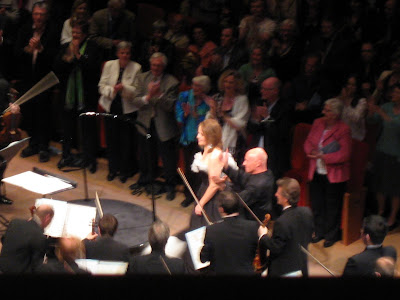 Upon reading that at her recent London concert, Renée Fleming was criticized for singing approximately 20 minutes, I was reminded that immediately before her visit in Copenhagen earlier this year, I wondered what the minimum "acceptable" amount of singing at a vocal concert was. In London, she apparently was on a sort of CD-promotion tour. In Copenhagen she sang from Richard Strauss´ Capriccio: 14 minutes + 2 extra orchestra songs = 20 minutes as well. But then, she arrived with the Orchestre de Paris and Christoph Eschenbach, and the Bruckner symphony was well worth a visit. For some. Though, most certainly, the ticket prices reflected on Renée Fleming´s contribution rather than Christoph Eschenbachs, as fine as it actually was.

As to Renée Flemings singing, Richard Strauss is what she does best. She thinks so herself and I don´t hesitate to agree with her. She still has that exact blooming quality in her voice I would have imagined Richard Strauss wrote this music for, combined with exquisite phrasing. And then she is a nice person as well, turning around and singing Zueiningung facing the large part of the audience with cheap tickets sitting directly behind the orchestra.

She will be back in Copenhagen in November 2010. Hopefully with more than 14 minutes. Less is hardly feasible, I suppose.