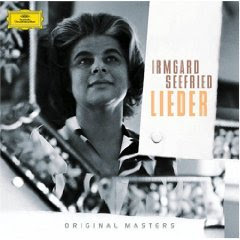 German soprano Irmgard Seefried (1919-1988) was an ensemble member of the Vienna State Opera in the socalled golden period of the 1050´s, contemporary with Elisabeth Schwarzkopf, Lisa della Casa, Christa Ludwig. A lyric soprano, among her operatic roles she was most renowned singing Mozart (Pamina, Susanna) and Richard Strauss (Composer-Ariadne and Octavian).

Most will agree, though, that where she truly excelled was in lieder, where she was perhaps the most admired interpreter of her time. I would expand that statement to say that, in my opinion, she is among the very few finest lied interpreters of all times.

What makes Irmgard Seefried so compelling is her completely unmannered and straight delivery, rendering a timeless air to her interpretations. Even Elisabeth Schwarzkopf stated that everyone in Vienna around that time admired Irmgard Seefried for her naturalness. Communicating the message always takes first place with Irmgard Seefried applying a minimum of vibrato and an even register, though strictly technically, she may be less than perfect, occasionally drifting slightly off-pitch. However, these things hardly matter as the apparent sincerity and honesty are entirely unmatched.

Among the many highlights are Mussorgsky´s Nunnery. Irmgard Seefried did much to "rehabilitate" the songs of Mozart, previously considered light fare, which are also represented here.

This double-disc is a re-release of previous recordings between 1953-60. Accompanied by Erik Werba.

Irmgard Seefried in her absolute prime (1947) with Schuberts Wiegenlied: