DVD: Macbeth from the Met 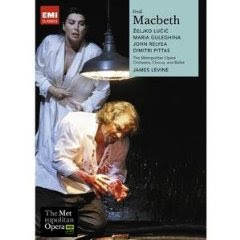 Directed by the former manager of the Royal Shakespeare Company Adrian Noble, this Macbeth is set in the 20th century against a consistently spare and dark background, with the main focus on the sexually charged relationship between the Macbeths. Which would have worked better had Maria Guleghina or Zeljko Lucic been more sexually charged performers.
While Zeljko Lucic may sing the notes, he is distinctly uncharismatic as a performer. And while Maria Guleghina still stands at the end of this enormously challenging part, she didn´t entirely convince dramatically either. However, it is not like there are dozens of highly superior Lady´s to chose from.

There are however, several superior Banquos to chose from, buth John Relyea seems to be in everything at the Met for the moment and I wonder who they are doing a favour (hint: Not really the audience). Dmitri Pittas as Macduff was fine and furthermore showed he could cry on cue.

James Levine, on the other hand generated considerable drama in the pit, reserving his endless placidity for Wagner, it seems. A great performance from him and the orchestra.

This DVD is somewhat unfortunate as there were performances later in the season with Hasmik Papian (no worse - if not much better than Ghuleghina), Alvarez, significantly better than Lucic in respect of voice, dramatic presentation and charisma, and yes, a certain German bass, not entirely unknown to Mostly. With respect to the last two performers at lest the commercial, not to mention the artistic value of the performance would certainly have seemed in prospect (and in my opinion in the actual performances) superior so one may wonder at the judgement and or other excigencies which caused the earlier performances to be recorded.


P.S. I'm sure Mostly (busy as she has been recently) is Most sorry to have missed the first run of Figaro at the Met this season. Relyea, returning to the title role once again, was lustily cheered (in general the enthusiasm of the audience for the various aspects of the performance seemed almost entirely divorced from their merit - but even discerning listener whose views I generally respect like him a great deal) and Danielle De Niese acted and sang in a manner that was disappointing even to some of her more enthusiastic detractors. In general the performance, from the dull conducting to the very flat production - with everyone seemingly at sea - was notably undistinguished. Even the normally excellent Isabel Leonard was dramatically blah if vocally fine as Cherubino. The evening was redeemed somewhat only by the well acted and sung Count of Mostly's compatriot Bo Skovhus and the surprising good, if initially shake, Countess of Emma Bell. Still, with Reylea and De Niese in the cast, one can be confident Mostly would have made the effort to be there if this were at all feasible.

Good to hear Bo Skovhus did well. Obviously, this is a Figaro I am sorry to have missed.