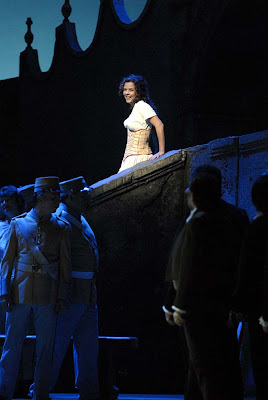 Not even 3 months ago, director Jürgen Gosch had to cancel this new Carmen at the Deutsche Oper due to illness, leaving the house with two choices: Either cancelling the whole thing or mounting a revival of the old 1979 production. They chose the last option and mounted a so-called "refreshened" version of their drearily realistic 1979 Carmen production. As I have not seen the originial version, I may not comment on exactly what constituted the "refreshments", though suffice to say the production looked drearily realistic and is better forgotten than mentioned.

I believe the house had offered a refund to ticketholders, however I came for Angelika Kirchschlager´s Carmen. Originally scheduled a couple of searons ago at the London Royal Opera (where she was replaced by Anna Caterina Antonacci), this performance marked her debut in the role.

And in short, Angelika Kirchschlager is a wonderful Carmen. Not the obvious choice of role for her as a predominantly lyrical mezzo-soprano basing her career primarly around such parts as Octavian (Rosenkavalier), her approach is nevertheless far from timid. Though essentially a lyrical voice, she clearly puts characterization over beautiful sound and projects well throughout her entire range. The dramatic punch some may miss in her interpretation, she makes up for with distinctive characterization. And she never forces her voice. Furthermore, her acting is fabulous in what is probably her most challenging part on stage as yet. This Carmen is certainly not a slut, she is an ordinary, elegant woman insisting on her freedom. In an accompanying interview Angelika Kirchschlager stated that: "There is nothing in Carmen, I do not see in myself. The figure is only positive." And this is exactly how she plays it.

Local favourite and ensemble member Michaela Kaune sang a touching Micaëla while American bass Raymond Aceto made an excellent impression with a both voluminous and steady voice and seems destined for greater things in the future.

Major applause also for Massimo Giordano. He has the notes, he looks fine, but ultimately I found him relatively uninteresting, mainly due to the lack of expressivity and engaged acting.

A bit more punch from Yves Abel in the pit would have contributed greatly to the creating of drama on-stage as the orchestra played almost too nicely. But they played well.

Managed to see it yesterday. Kirchschlager did a very fine job in bringing across her new definition of Carmen - a definition I could identify with, at last; in spite of the dusty production (apart from superb singing with beautiful, microscopical shadings of emotion that I never knew were there). Giordano & Kaune were vocally great (literally), but sang as if the competition for loudest opera singer of the year was just around the corner. I can't decide if that set off Kirchschlager's finely tempered efforts more or was on the other hand a tiny bit unfair. (As most of the audience went for volume,it seemed)
I had to look twice in the last scene, because pink colour or no, with hair tied back, trousers and tie, I kept hearing Carmen but seeing Cherubino/Octavian. The idea of Carmen wearing trousers wasn't bad initially, though.
The audience wasn't exactly educated, I have never heard people applaud in the middle of the overture before.
Elina Garanca (husband in tow) was doing her homework for Vienna in the row behind me.

Here are the pictures: [url]http://www.samoyedskaya.com/carmen-do.html[/url]

Anonymous, your link seems to be wrong, leading to this message in Polish (I think): Przykro nam, strona o podanym adresie nie istnieje