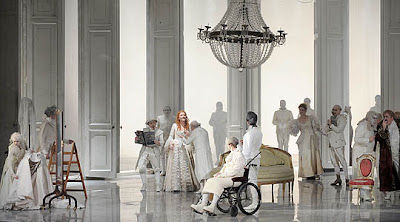 The main interest in this revival of Briegers stylish Rosenkavalier production at the Berlin State Opera was Dorothea Röschmann and Magdalena Kožená in their role debuts as Marschallin and Octavian, respectively. In the end, Röschmann cancelled her participation and was replaced in all performances by Angela Denoke.

Magdalena Kožená´s stage presence is a mixture of neurotic hyperenergy and shyness, not entirely inappropriate for an Octavian. And her voice is clearly among the most beautiful lyrical mezzo-sopranos on stage today, light as well as even. However, as Octavian she is stretched beyond her vocal limits, almost retorting to shrieking out the high notes and with seemingly no vocal reserves left. Bearing in mind the relatively small size of this house, any attempts at this part at a larger house would seem hazardous. As she is clearly no comic actress there may not be many operatic parts suitable to showcase her immense vocal qualities. I believe ms. Kožená has previously stated that she considers lieder singing her strongest asset, a field where she is matched by few.

Rather superb performance from the slightly cool-voiced Angela Denoke as the Marschallin, capturing the essence of the part with extraordinary vocal characterization in addition to looking great and acting well. A slight unsteadiness towards the top is of far less importance here than in the heavier repertoire (Leonore-Fidelio, Kundry etc.), she unfortunately takes on as well.
Also Sylvia Schwartz, a company member who was declared indisposed due to a a muscle fiber neck injury, made a very fine Sophie. Peter Rose is as fine an Ochs as any and while subtlety may not be Asher Fish´s strongest asset, the piece does move along in a refreshingly no-nonsense reading. 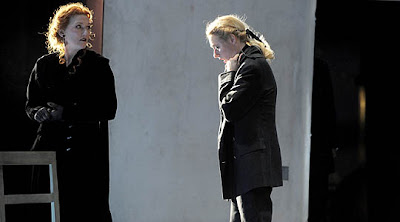 I'm glad you liked that "Rosenkavalier" performances which I attended as well yesterday. Personally, I was completely stunned by Angela Denoke's Marschallin, whose noble beauty, immense vocal elegance, and perfectly "aristocratic" diction made her as ideal a Marschallin as I can imagine - actually reminding me of "Golden Age" Marschallin-singers like Schwarzkopf, Reining, or della Casa. Her "Hab mir's gelobt" had me close to tears and I completely freaked out when she took her solo bow. :)

I know that this may look slightly off-topic, but I can't resist posting that link:

je-b's reference to great Marschallins (Marschallinen?) of the past reminded me of this stunning video...

Beckmesser - that is just a great video. Clearly shows her immenent textual understanding. Must have been quite something to have heard her live in this part.