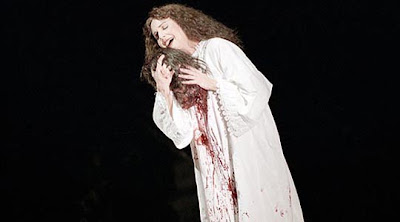 Being a huge admirer of Harry Kupfer´s stagings of Richard Wagner´s works, I had high expectations for this Salome, playing for a sold-out Berlin State Opera on the evening before the big Anna & Rolando show.

However Harry Kupfer´s take on Salome was strangely disppointing: The set depicts a prison yard of sorts, encircled by high walls with small windows. The libretto is being meticulously adhered to, with Jochanaan in chains and Salome fluttering around him.
None of the vast depths of Salome are revealed and/or explored in this Harry Kupfer production. Very disappointing. For insightful and revelatory Salome productions, David McVicar or Jürgen Flimm seem to be the ones to turn to.

Mark Delavan is a large man with a large, wooden and uncharacteristic voice. On stage, he is simply stiff and uninteresting. On the other hand Janice Watson is a fine singing-acting Salome, moving vividly on stage and hitting all the notes on pitch.

The Staatskapelle played well for Philippe Jordan. But somehow it doesn´t strike me as a genuine Richard Strauss orchestra, perhaps due to a certain lacking in transparency (or perhaps I am just imagining things...). Undoubtedly a consequence of Daniel Barenboim´s conducting style. Fine with me as long as they continue to play as magnificently as they do at the moment in the Wagnerian repertoire.
Posted by mostly opera... at 11:43